Rory McIlroy, Sergio Garcia Have Falling Out Over LIV Golf, Per Report 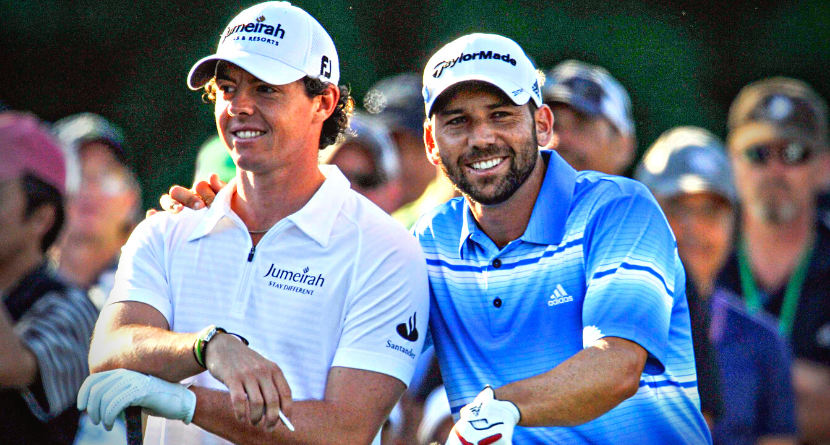 The friendship between Rory McIlroy and Sergio Garcia has been fractured by their conflicting allegiances in professional golf’s civil war, according to a recent report from Golf Monthly.

The feud may have reached a point of no return when both players started lobbing “bitter and personal” barbs at one another, resulting in a “complete deterioration” of the relationship. As the Golf Monthly story notes, McIlroy served as an usher in Garcia’s 2017 wedding, so their bond was much deeper than a successful Ryder Cup partnership.

Garcia, a founding member of the LIV Golf Series, has reportedly alienated himself from many of his peers on both the PGA Tour and the DP World Tour. His reputation first took a hit in May when his argument with a rules official at the Wells Fargo Championship was audible to television viewers.

“I can’t wait to leave this tour,” Garcia whined.

Sergio Garcia, frustrated with what he thought was the early start of the clock to look for a lost ball, seemingly telling a rules official…

…I cant wait to leave this tour

…cant wait to get outta here

…just a couple more weeks until I don’t have to deal with you any more pic.twitter.com/k1qRRYbmsF

The 2017 Masters champ deepened the divide last month, when he unleashed an expletive-laden locker-room rant at the BMW International, according to a report from the UK Telegraph. After learning that he had been banned from the Scottish Open, along with the other LIV defectors still holding onto a DP World Tour membership, Garcia reportedly said to no one in particular: “This Tour is s—, you’re all f—-d, should have taken the Saudi money.”

Before news of their falling out broke, Washington Post writer John Feinstein foreshadowed their split with a fairly innocent — and undeniably humorous — anecdote that made the rounds on social media.

“[Rory] McIlroy and Garcia are good friends; they were in each other’s weddings,” Feinstein wrote. “But when Garcia told McIlroy the reason to join the LIV Tour was `so we can finally get paid what we deserve,’ McIlroy laughed out loud. `Sergio,’ he said, `We’re golfers. We don’t deserve to be paid anything.’”