Sergio, Norman Respond To Calls For LIV CEO To Step Down 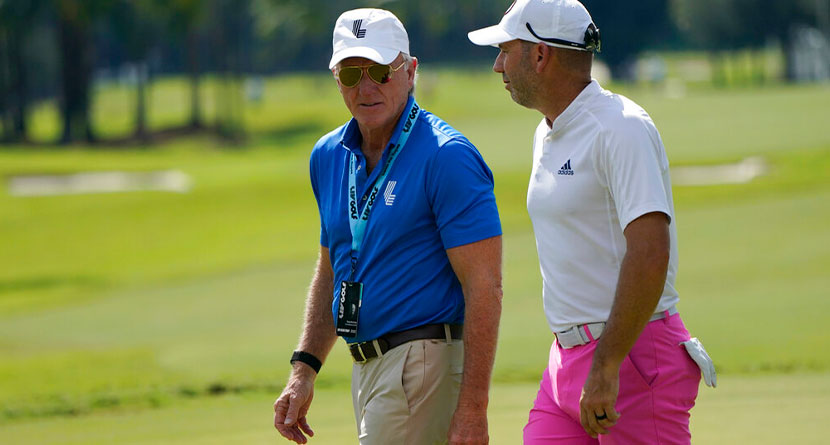 Tiger Woods and Rory McIlroy have made headlines over the past few weeks criticizing LIV Golf frontman Greg Norman, and saying he would need to step aside in order for any peace talks to commence between the breakaway series and the PGA Tour.

After Tiger’s press conference in the Bahamas ahead of the Hero World Challenge, one of LIV’s most prominent stars is coming to Norman’s defense.

Sergio Garcia spoke in support of Norman, and in the process, called out PGA Tour commissioner Jay Monahan.


“They say that Greg Norman has to go; and Monahan has to stay or go?” Garcia said. “It’s very easy to say those on the other side have to go. And those on your side? There are also people who have done things wrong.

“You have to look at everything. Greg Norman is our CEO and we support him. We all wish we could come to an agreement. There are people who could have done wrong in both places, but it seems that there are only bad guys on one side.”

“Greg Norman is our CEO and we support him. We all wish we could come to an agreement. There are people who could have done wrong in both places, but it seems that there are only bad guys on one side.”

Some media members have been critical of Monahan for not taking the threat of LIV Golf seriously enough. Monahan said the PGA Tour was “moving on” after Phil Mickelson’s inflammatory comments seemed to derail any momentum the Saudi-backed league had back in February of this year. Since then, LIV has regained momentum and put together and eight-event season while poaching several stars from the PGA Tour, including reigning Players champion Cameron Smith.

Norman himself also responded to Woods’ and McIlroy’s comments over the weekend, as well.

“When the monopolist’s territory is getting threatened, they’re going to rear their ugly head up and do what they do,” Norman said. “But from my whole perspective, I’ve always taken the high road this year. I will continue to take the high road because I believe in our business model. I believe in our people, I believe in the players’ independent rights, and we’ve already seen a dramatic shift in our audience.”

Rumors began to spread last month that Norman was going to be removed as LIV Golf CEO, and would be replaced by former Taylor Made executive Mark King. LIV Golf managing director Majed Al-Sorour has since come out and said those rumors are false, and that there are no changes being made to Norman’s role as CEO. Norman echoed that sentiment when addressing the comments made by the two PGA Tour stars.

“I pay zero attention to McIlroy and Woods, right?,” Norman said. “They have their agenda for whatever reason. They’re saying whatever they want to say. It has no bearing or effect on me. I’m going to be with LIV for a long, long period of time.”

Norman went on to say he has the support of LIV’s investors, and that the ambitions of LIV are “pretty significant and elevated” from what they accomplished in 2022. LIV is expected to have 14 tournaments in 2023, up from the eight they had this season. The official schedule has not been announced yet, but they have already announced four host venues. LIV Golf Mayakoba will be hosted at the Greg Norman-designed El Camaleon – current host of the PGA Tour’s Mayakoba Classic – in February, The Grange will host the first LIV event in Australia in April, Sentosa will be the host venue for LIV Golf Singapore later that month, and then Valderrama will be the site of LIV’s first event in Spain.

As LIV Golf and the PGA Tour continue their feud, several players have mentioned the possibility of the two sides sitting down for “peace talks”. After his comments in support of Norman, Sergio addressed that possibility, as well.

“First everything has to be settled,” he said. “It’s not easy now that we’re involved in a legal process and also because everything we want is prohibited. If you’re sitting with someone who every time you propose something is a ‘no’ … in the end, how are you going to reach an agreement if only what they say is worth it? I don’t know how we will reach an agreement.”

McIlroy has said LIV would need “an adult in the room” in order to begin those conversations, and Woods also noted the legal proceedings would need to be resolved or dismissed in order to explore the possibility of coming together. Despite the mentions of coexisting, no one has offered any details on what that would look like.

I thought it was telling that Tiger didn’t have an answer to what a LIV-PGA Tour agreement looks like. Everybody keeps saying, “there must be compromise!” but it doesn’t seem like anyone (including me) knows what in the world that even means.

In an interview with Paul Kimmage, McIlroy said he wanted to “be as much of a pain in (Norman’s) arse as possible” after Norman said in a Washington Post interview he had been “brainwashed” by the PGA Tour.

Golf’s civil war marches on, and it doesn’t sound like the two sides will be seeing eye-to-eye any time soon.