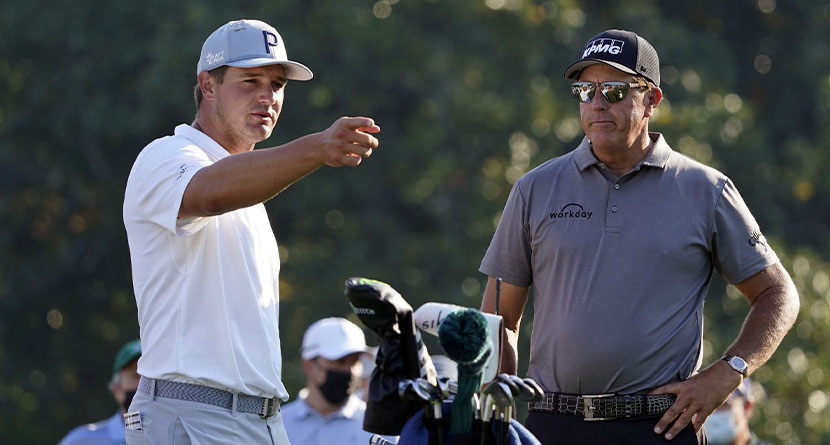 The new leaders of the potential splinter Super Golf League are nothing if not persistent and brash.

Just 36 hours before the first ball was to be struck at the second major championship of the season, representatives from the SGL, one of the two potential breakaway circuits that was expertly explained and differentiated by The Firepit Collective’s Alan Shipnuck, met with top player agents at a house on Kiawah Island just minutes away from where the PGA Championship will be played on Thursday.

According to one agent who spoke on the condition of anonymity with GolfDigest.com’s Daniel Rapaport, the overarching theme of the evening was an “all is well” message and assurances that there haven’t been any hindrances to the project’s stated mission of creating a competitive alternative to the PGA and European Tours.

“It all happened pretty quick,” the source told Rapaport. “It was like, We have everything sorted, it’s all going to work out.”

Also at the meeting were a team of lawyers “from a high-profile American law firm that is handling the venture’s contractual work,” according to the report, who are looking through the fine print to find out what, if any, legal ramifications the players who opt-in may face.

Earlier this month, a wave of reports surfaced indicating that the likes of Dustin Johnson, Phil Mickelson, Adam Scott, Brooks Koepka, Bryson DeChambeau, Rickie Fowler and Justin Rose were sent offer contracts by the SGL to the tune of $30-$50 million per player. On Tuesday night in Kiawah, reps from the SGL said more player contracts would be drawn up and delivered within the next 4-6 weeks.

However, as the threat of the potential splinter Tour has increased, the Five Families of golf — the PGA Tour, the USGA, the PGA of America, the Royal & Ancient and Augusta National Golf Club — are beginning to take sides, starting this week at the PGA of America’s flagship event.

Previously, PGA Tour commissioner Jay Monahan had stated “any defection will result in immediate suspension and likely permanent expulsion from the PGA Tour,” although the legality of such a move is still up in the air.

Yet, operating under that assumption, PGA of America CEO Seth Waugh cast another dye of doubt by saying defectors could lose their right to play in the Ryder Cup as well.

“If someone wants to play on a Ryder Cup for the U.S., they’re going to need to be a member of the PGA of America, and they get that membership through being a member of the tour,” Waugh said. “I believe the Europeans feel the same way, and so I don’t know that we can be more clear than that.

“Particularly for younger players that are going to have a 20-year career out here, I just don’t think they’re going to be better off in that format than they already are,” Waugh continued. “I’ve talked to a bunch of them. As you can imagine, you look them in the eye and you just say, ‘Be careful what you wish for, because short-term gain feels good for a little while, but long-term gain is what makes lives.”

The positions are becoming clearer and the lines in the sand are being drawn, but the strong stance made by the establishment has cast more doubt among at least one player manager present on Tuesday evening.

“I left the meeting more confident than I was before that this likely won’t go forward,” the source told Rapaport. “I think they’ll realize there are too many hurdles, too many obstacles.”

With a major championship kicking off on Thursday, virtually every top player who stepped in front of a microphone was asked about the ongoing discussions with some being more forthcoming than others.

“It’s a complete distraction,” Bryson DeChambeau said. “I would say from my perspective, I’d want to know what way to go and just let’s go, whatever it is. Whatever is best for the players and for the fans is what I would support.”

“I’m very much against it. I don’t see why anyone would be for it,” Rory McIlroy said.

Rickie Fowler called the idea “definitely interesting,” while Phil Mickelson outlined what he sees as potential benefits for fans.

“I think the fans would love it because they would see the best players play exponentially more times,” Mickelson said at the Wells Fargo Championship earlier this month. “Instead of four or five times, it would be 20 times … I don’t know what the final number is.

“But that’s a big deal to give up control of your schedule. I don’t know if the players would be selfless enough to do that. But every other sport, the entity or teams or leagues control the schedule. The players kind of play where they are told to play. Whereas here, we’re able to control it.”

With more conversation and more money being tossed around, players will seemingly have to make their decisions in the near future. The SGL had previously proposed a September 2022 kick-off date, which puts a deadline on what has previously been a relatively abstract and pie-in-the-sky idea.

The whole thing becomes a question of legacy and legality. What is financial freedom worth? Will the new league even work? Can the Tour and other traditional establishments legally follow through on what they are threatening? All that and more is on the minds of the top players in the world this week, not to mention the major championship they will be competing for on Thursday.