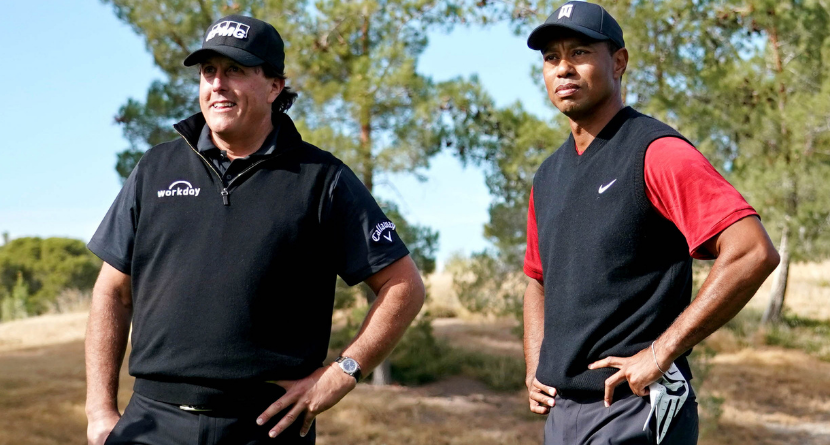 It’s time for another round of everyone’s favorite game — searching the official websites of major championships for clues as to which iffy superstars might be planning to tee it up.

In all seriousness, Tuesday actually brought some exciting news in that department, as a number of enterprising golf outlets were keen to point out that both Tiger Woods and Phil Mickelson had filed entries into the 2022 U.S. Open field.

Phil Mickelson and Tiger Woods have filed entries for the @usopengolf. Entries opened on February 23rd and close April 13th at 5pm. pic.twitter.com/yCaT03nLK5

The application period opened on February 23, with a deadline of April 13 at 5 p.m.

In a stunning turn of events given where things stood at the start of the year, Woods’ inclusion is far less surprising than Mickelson’s. After all, the 15-time major champion just made the cut at the Masters and immediately let it be known that he intended to play in the Open Championship at one of his favorite venues, St. Andrews, with an eye on possibly teeing it up in May’s PGA Championship.

Tiger Woods confirms that he WILL play at The Open in July, but is unsure if he’ll take part in the PGA Championship in May ⛳pic.twitter.com/oq75rNuiDm

But a possible return from exile for Lefty? At the tournament that famously eludes him in his quest for the career grand slam? It has a redemptive ring to it, whatever your stance on Mickelson’s public relations nightmare of his own making.

Though it should be noted that enacting the proper steps to play in the U.S. Open doesn’t necessarily preclude Mickelson from defending his title at the PGA. We’ve just heard nothing to suggest his hiatus might soon be ending. Speculation will surely ramp up in the lead-up to Southern Hills.

The U.S. Open will be held June 16-19 at The Country Club in Brookline, Mass. The venue was used for three prior U.S. Opens and famously played host to the Americans’ Ryder Cup comeback in 1999. Woods and Mickelson were both members of that squad.