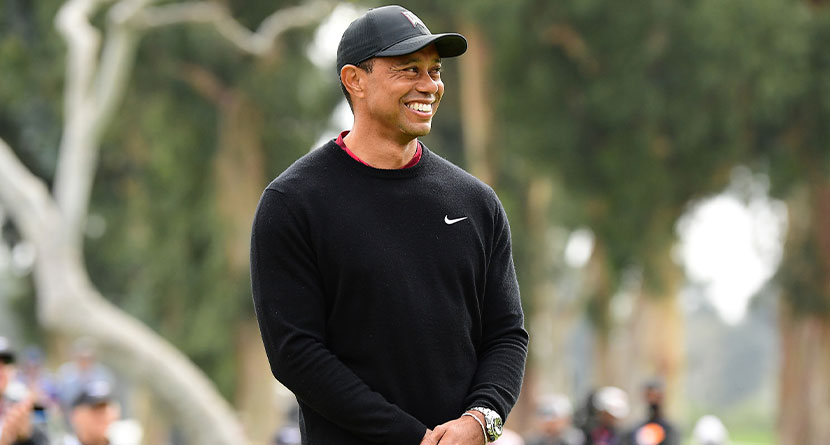 Woods spent nearly 45 minutes on the air with Jim Nantz and Sir Nick Faldo talking about everything from a timeline for his return and the state of his game to Woods’ history at Riviera and his thoughts on the broader issues facing the game of golf.

Tiger Still Has A Long Way To Go, But…

Give Jim Nantz credit – or don’t – he wouldn’t take “I don’t know” for an answer. After an introductory question about his rehab, Nantz got right into it: “Fair to say we’ll see you on the PGA Tour in 2022?” he asked.

“You will see me on the PGA Tour. I just don’t know when,” Tiger responded. “Trust me, I’d love to tell you that I’m going to be playing next week, but I don’t know when, which is frustrating in that sense because I’ve been down this road before with my back, where I didn’t know when I was going to be able to come back. It’s hard to not have goals out there. I don’t have any of those dates in my head. I don’t know yet.”

Nantz pushed on Augusta in two months’ time, but Woods wasn’t biting, although he said he could play in something like the Par-3 Contest today. So will you be playing in it?

“You will see me on the PGA TOUR, I just don’t know when.” @TigerWoods joins Jim Nantz and @nickfaldo006 to discuss his rehab and return to golf. pic.twitter.com/tKzhH8pnJ5

Trying a different tactic, Nantz quizzed Woods on which major venue would set up best for him to be able to play four rounds.

“You guys are really hammering me on this, aren’t you?” Woods said. “I understand. I have a lot of work to do. And I’ve been working my butt off for the last 10 months even to get myself into this position. It’s been a tough road. I still have a long way to go.”

What it all came down to was Woods is who he is, and he won’t be out at any Tour event as a ceremonial golfer.

“I don’t want to come out here and just play. That’s how I am,” he said. “I need to feel that I’m confident that I can beat these guys and I got to do the legwork at home. It’s on me.”

While that legwork is on Woods, he seems a lot closer to a return than he did a year ago pre-accident, which is a wild thing to surmise given the happenings of the past 12 months. And as if golf fans needed something to cling to, Woods gave it to them on Sunday afternoon as the tournament came to a close.

Golfweek’s Adam Schupak, covering the tournament from Riviera Country Club, reported Woods did something most able-bodied caddies and players dread: walking up the hill to Riv’s famous clubhouse.

“Tiger just walked the 52 steps up the hill from 18 green at Riviera to the clubhouse like a man who could play Augusta National in April,” Schupak tweeted. “I know that’s crazy talk. but beginning to come around to the belief that he’ll be back sooner than he’s letting on to. Can’t fake those steps.”

So, you’re saying there’s a chance…