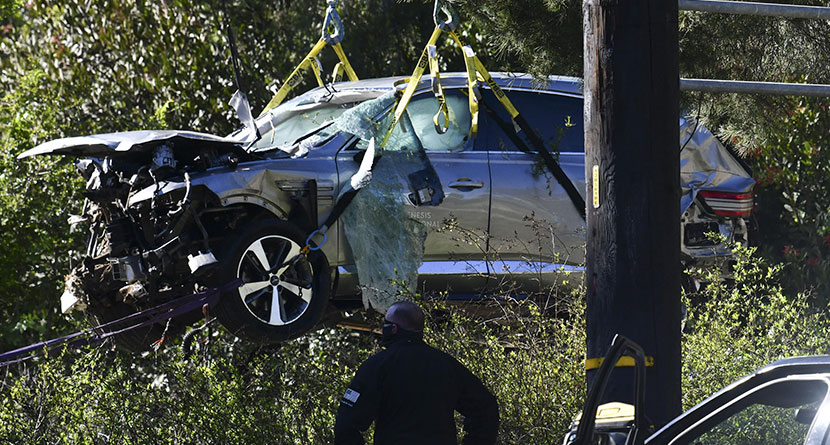 A week after teasing the general public by releasing a statement saying the cause of Tiger Woods’ Feb. 23 car crash was known but not being revealed, the LA County Sheriff’s Department gave more information on Wednesday.

Villanueva reiterated that there were “no signs of impairment” and clarified that Woods has not been charged or cited in connection with the accident.

“People said, ‘Oh, they should have drawn blood or done this or done that,’” Villanueva said. “Without the signs of impairment, we don’t get to the point where we can actually author a search warrant and determine the probable cause to get that and execute that search warrant, so that did not happen. And that is not preferential treatment. That would occur in any collision of this type.”

He will not face any charges and there were no signs of impairment. https://t.co/456RZpzdS0

As part of the Los Angeles County Sheriff’s Department’s investigation into the crash the department executed a search warrant to obtain data from the “black box” in the car that was crashed. Sheriff’s Deputy John Schloegl confirmed that the black-box data has been downloaded but he did not reveal its contents. The data from it typically can show the vehicle’s speed, steering angle, brake and acceleration activity before impact.

“A cause has been determined; the investigation has concluded,” Sheriff Alex Villanueva told the Associated Press during a live social media event last week. He went on to say that investigators need permission from Woods to release the information.

With approval from the Woods camp, Jim Powers, captain of the Lomita sheriff station, was able to elaborate on details from the accident.

“I know there were allegations of an incident that occurred prior to the collision. I reviewed video footage and I watched him on video walk out to his car, put his personal belongings in his car and drive off the property. And he was driving very normal, very slow as he began driving, to the point where it didn’t appear he even put his foot on the accelerator. He just took his foot off the break and allowed the car to roll away.

“He made complete stops at two stop signs and stopped for a traffic signal before entering the highway. So there is no evidence of any increased speed or rushed behavior.

Powers said investigators believe that Woods may have accidentally slammed the accelerator instead of the brake during the crash, leading to the excessive speeds continuing through the impact with the tree.

“There was no evidence of braking throughout this collision. It is speculated and believed that Tiger Woods inadvertently hit the accelerator instead of the brake pedal, causing the 99 percent rating on the accelerating pedal.”

Finally, Powers again reiterated that Woods would not be cited with reckless driving or any other citation as there need to be multiple offenses present to bring that charge.

“We did not check his phone for texting. There was really no need to do that,” he said. “There was no other evidence. The only associated factor—well, there are two factors. The speed, and the failure to maintain the curvature of the road. That’s it, there’s nothing from the cell phone to indicate distracted driving.

After the release of the report, Woods provided a statement on social media thanking first responders and doctors as well as thanking fans for their well wishes.

“I will continue to focus on my recovery and family, and thank everyone for the overwhelming support and encouragement I’ve received throughout this very difficult time.”