Tiger Spotted Walking Without Aid Of Crutches At L.A. Hotel 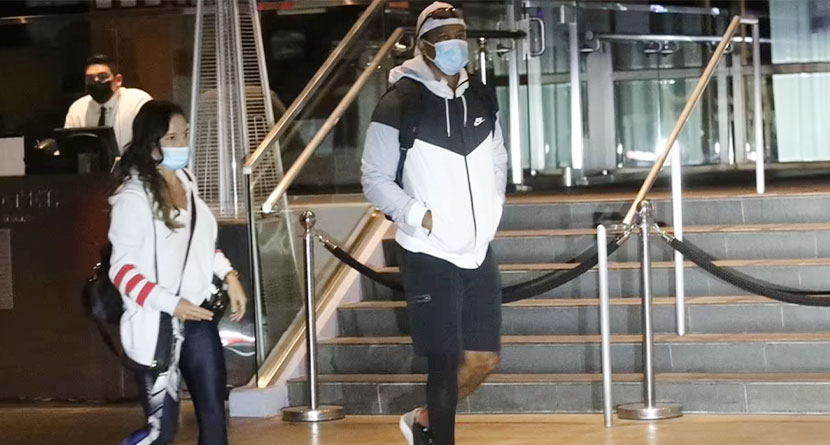 For the second time in a matter of weeks, Tiger Woods was again spotted in public walking without the aid of crutches, this time outside a hotel in Los Angeles.

Woods was last seen publicly following his son, Charlie, around at a junior golf tournament in Florida in early October, and on Sunday, TMZ cameras spotted Woods walking into an L.A. hotel with his girlfriend, Erica Herman.

Woods’ gait was noticeably cautious as he and Herman made their way into the hotel and Woods appeared slightly hampered as he climbed five steps to get into the building (full video available on TMZ.com).

🚨TMZ #VIDEO: Tiger walking in LA. Big foot style stuff again here but it’s new content. They’re reporting a “noticeable” limp but can see he is getting around. https://t.co/S2h5kzafFc pic.twitter.com/iLx0w90LdM

The video surfaced only days after Justin Thomas gave an encouraging update on Woods’ health on the No Laying Up podcast.

“He’s doing well, especially all things considered,” Thomas said. “I mean, it’s Groundhog Day. Every day’s the exact same thing for him. But at least he’s able to — pictures were going around of him at Charlie’s tournament, Sam’s soccer tournaments here and there. He’s able to be a dad somewhat again, which is most important.

“He’s still his sarcastic a—— self so nothing has changed there, so I’m glad to see that he’s still chipper as always.”

As conjecture and speculation continue to swirl around Woods and when he may make his first official public appearance, ESPN.com’s Bob Harig reported that a navigational tracking app saw that Woods’ yacht, Privacy, has made the journey from South Florida to a marina in Nassau, where he docks it during his stays at Albany, Bahamas.

🚨It’s so good to see the Big 🐅 walking with full weight on the right leg again. (📸: DailyMail via Backgrid) #TigerWoods pic.twitter.com/dkkiVhTSTW

As Harig points out, Woods regularly spends time in the Bahamas and could be planning to spend the Thanksgiving holiday there, but there’s also the added aspect of a little golf tournament taking place down there in a few weeks hosted by Woods, the Hero World Challenge.

Regardless of Woods’ plans and whenever he plans to speak publicly for the first time, the good news, as Thomas pointed out, is that he’s getting healthy again and at the very least, he’ll hopefully be able to be a good father to his children.

“Obviously I hope he (can play again),” Thomas said. “But at the same time, as I said after the accident, as long as he can be a dad and be normal with that again, that’s the number one priority, and the rest of this is a bonus.”