Tiger Spotted On Course Without Crutches For First Time Since Crash 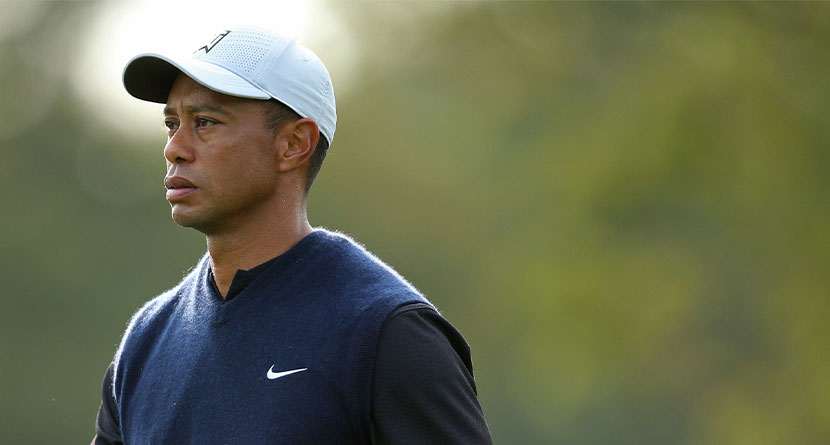 For the first time since his February 23 car crash, Tiger Woods was spotted in public without crutches or a personal aid.

Woods, who was photographed on the range at a Florida junior golf tournament watching his 12-year-old son, Charlie, hit balls, was pictured in his recognizable legs-crossed, hand-on-club stance while his injured right leg remained in a leg sleeve.

The original photo was taken by Mack Williams and posted to Facebook. Since its original posting over the weekend, the photo has been disseminated around the world via social media.

🚨BACK ON THE COURSE — Tiger Woods was seen this weekend in Florida watching his son compete at a junior event. TW was wearing a sleeve on his right leg & golf clothes on the range with a club in hand. First sighting in quite some time. 🙌 (Post credit: Mack Williams / Facebook) pic.twitter.com/U7Ie42ZxOE

Prior to this past weekend, Woods had only been seen with crutches and a walking boot during a provided update in May…

…and subsequently in the leg sleeve, but still requiring crutches when he was spotted heading to a doctor’s appointment in Los Angeles in July.

The photo led TMZ on the hunt for more footage, and they found a Bigfoot-esque video of Woods walking unassisted up a fairway during the junior tournament.

As far as health updates, Woods nor his camp has said much, but a PEOPLE Magazine report offered some encouraging news for Tiger fans in the light of the newly-released images.

“Tiger has made a remarkable recovery in the past few months, but it’s even more significant lately. It’s like every day he can do more, he can handle more, the pain is less, and he’s feeling better,” a source told PEOPLE.

“He says that the pain is very manageable now. For the first couple months, he’d just be sitting at home with his leg up, and it would be throbbing and he’d be in so much pain. Now he still has pain, but it’s nothing like what he dealt with before. He’s feeling strong and healthy and optimistic that he’ll be able to return to tour.

“He’s got a timeframe in his head, but he’s not really putting that out there; he knows when he wants to return, and he’s going to make it happen. He says even if he’s not at 100%, he knows how important it is to get back out there and compete. That’s his goal.”

Woods required multiple surgeries to repair comminuted open fractures to both his tibia and fibula bones in his right leg his Feb. 23rd single-car rollover crash. He then spent about three weeks in Los Angeles-area hospitals, heading home to South Florida in mid-March.

“This has been an entirely different animal,” Woods told GolfDigest in May. “I understand more of the rehab processes because of my past injuries, but this was more painful than anything I have ever experienced.

“My physical therapy has been keeping me busy. I do my routines every day and am focused on my No. 1 goal right now: walking on my own. Taking it one step at a time.”