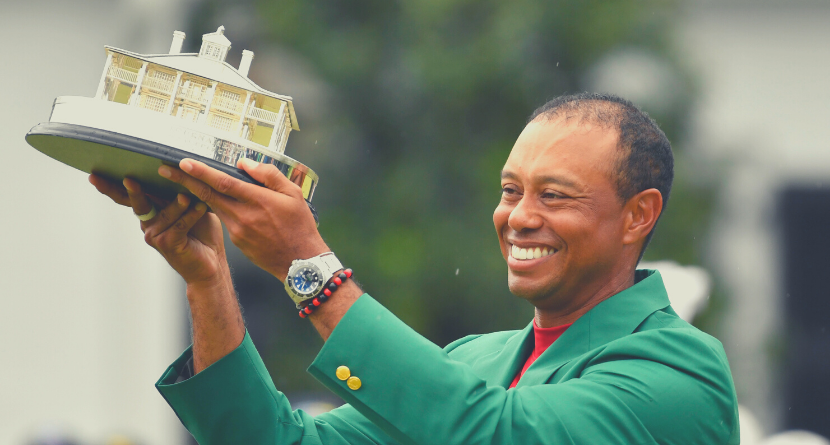 Chasing down Jack Nicklaus has been woven into the Tiger Woods legend since boyhood, so it should come as no surprise that someone close to the 15-time major champion believes he’s setting his sights on another one of the Golden Bear’s records.

What may, however, raise some eyebrows is the timeline involved: a “member of his team” told People Magazine that Woods is targeting a return at the 2023 Masters, where, at the age of 47, he will take his first crack at supplanting Nicklaus as the oldest player to don the green jacket.

27 years at Augusta.
26 years as a professional.
25 years as Masters champion.
Immeasurable impact.

Congratulations, @TigerWoods, on your Hall of Fame career. pic.twitter.com/Pj81AHerVX

The source indicated Woods is practicing regularly and able to manage his pain through physical therapy. Surpassing Nicklaus’ record of 18 major championships may be a longshot at this point, but he’s channeling his energy into one-upping his idol’s last hurrah at Augusta in 1986.

Nicklaus was 46 when he rallied from six strokes back with 10 holes to play on Sunday for the most memorable of his six Masters titles.

“Tiger was known for his focus before, but now he’s learned to focus through terrible pain,” the source said. “And now that the pain has mostly faded, that focus is still there. He’s going to be a force when he returns to the game. He’s going to dominate.”

The topic of Woods’ return was mostly tabled last week, when he was inducted into the World Golf Hall of Fame after a stirring introduction by his 14-year-old daughter, Sam.

Left unsaid in the People report was whether this new goal necessarily diminishes the chance of an earlier return. Such a glowing assessment of his health invites speculation about the Open at the Old Course this summer, and Woods will almost certainly take another run at winning the PNC Championship alongside son, Charlie, in December.