Tiger Woods A ‘Game-Time Decision’ For The Masters 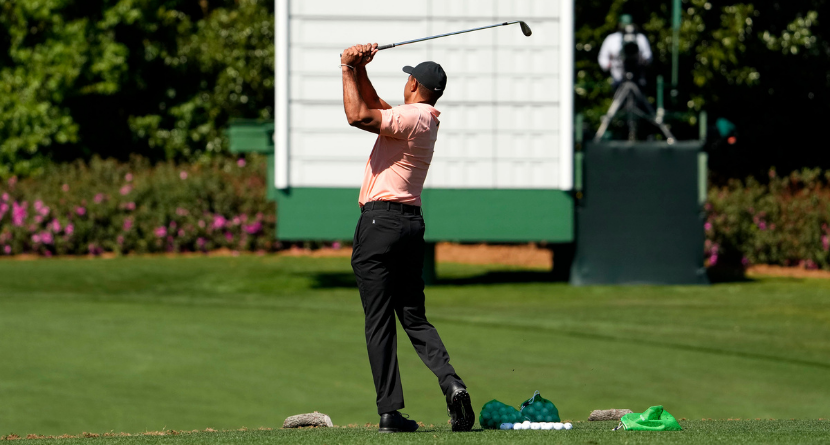 On Sunday morning we heard from the ultimate Tiger Tracker — the man himself. Tiger Woods tweeted he was heading back to Augusta National for another tune-up on the eve of Masters Monday. And after a brief range session and a nine-hole practice round alongside caddie Joe LaCava, this much is clear:

There is now a realistic chance you will see the most stunning comeback in Tiger Woods’ Hall of Fame career on Thursday at the Masters.

“I will be heading up to Augusta today to continue my preparation and practice,” Woods tweeted at 9:40 a.m. EST. “It will be a game-time decision on whether I compete.”

I will be heading up to Augusta today to continue my preparation and practice. It will be a game-time decision on whether I compete. Congratulations to 16-year-old Anna Davis on an amazing win at the @anwagolf and good luck to all the kids in the @DriveChipPutt.

By now you’re well aware of how unlikely any of this was after the events of February 2021. Yet here was Woods on Sunday, 14 months after nearly losing his right leg in a rollover crash, prowling the grounds of Augusta National and flashing that familiar smile as he mixed it up with players who may soon rue their own excitement at the possibility of seeing his name in the field.

“He looked like the Tiger we saw before the accident, the way the swing looked and the speed,” said Billy Horschel, who was among the players who greeted Woods on the range before his round. “For him to hopefully be playing — which I think he is — I think we’re all giddy about it.”

The club was closed to the media Sunday afternoon save for some views of the practice range. According to Golf Digest Australia reporter Evin Priest, Woods “did not miss a shot” during his warm-up.

“Every shot was flushed,” added Priest, who co-hosts a podcast with former Woods caddie Steve Williiams. “[He] has not lost any speed.”

Another practice round could follow on Monday as Woods continues to test his pain management before making a final decision. He is slated to speak to the media on Tuesday, though he is technically not obligated to make a call until he’s summoned to the first tee on Thursday.

Woods has not played since the 2020 Masters, which was delayed until November due to the COVID-19 pandemic. He is seeking to make his 24th start in a tournament he’s won five times, most recently in 2019.