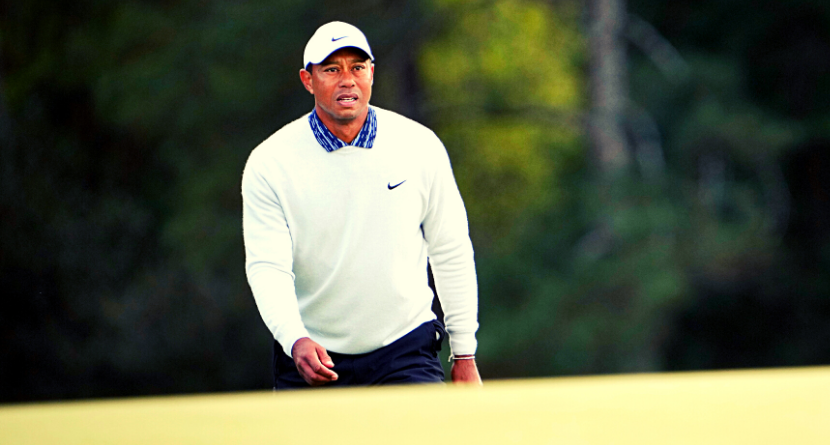 Tiger Woods was once again spotted testing his fitness for a major championship on Thursday, and a well-connected golf writer is already reporting that all systems are go for the PGA Championship in May.

Golf Digest’s Dan Rapaport published the scoop on Thursday afternoon after a private jet carrying Woods touched down in Tulsa earlier in the day. Several videos of the 15-time major champion’s practice round at Southern Hills soon surfaced on social media, and from the looks of them, he continues to appear more than capable of competing for one of golf’s most prestigious titles.

This year marks the 15th anniversary of Woods’ triumph in the 2007 PGA Championship at Southern Hills. That was played in Augusta, when temperatures in Tulsa, Okla., can sizzle. Still, the locale figures to produce conditions more conducive to the many ailments Woods must manage — especially the right leg he nearly lost when the SUV he was driving rolled down a ravine in February 2021.

Our 2007 champion was back at Southern Hills today for a quick practice round. #PGAChamp | @TigerWoods pic.twitter.com/UDw6zMtTeq

Jack Nicklaus revealed after the Masters that the question is almost more mental than physical at this point, that Woods would have to endure what most would consider unbearable pain whether he made his comeback this year or waited until 2023.

🚨Tiger throws a 🎯 to 6 lol pic.twitter.com/YqJ7GjHgQt

Testing the green at 6 pic.twitter.com/dPQDvT0qkE

“He says, ‘You know, I know I’m gonna hurt,'” Nicklaus said of a conversation the two shared at the Champions Dinner. “The doctors told me I’m gonna hurt. I accept that. What am I gonna be next year? And [the doctor] says, ‘You’re still gonna hurt.’

“He said, ‘Well, why in the world would I wait a year to play if I know I’m gonna hurt both years? Why don’t I just get back and start playing and just suck it up?’ Which is basically what he did. I thought his performance was quite good. I mean, I think he wore out on Saturday and Sunday, but I think it was great to have him back in the game.”

Woods made the cut at the Masters but faded over the weekend, finishing in 47th place at 13-over-par.