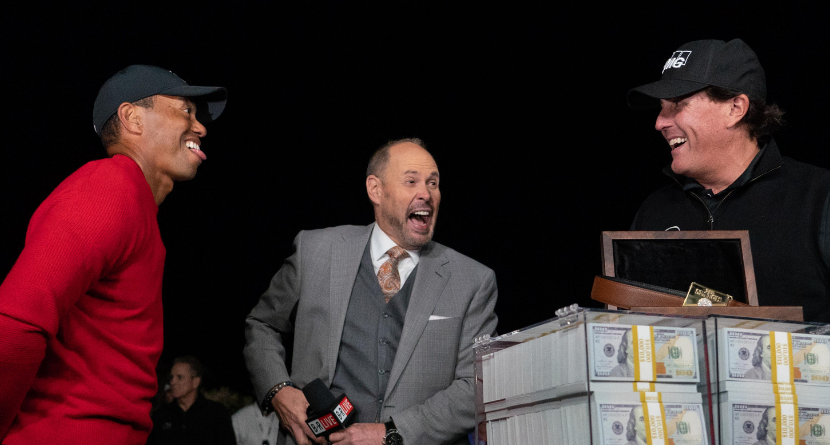 Tiger Woods has gotten the best of Phil Mickelson once again. And he did it without touching a golf club.

Woods was announced as the PGA Tour’s inaugural winner of the $8 million top bonus in the $40 million Player Impact Program on Wednesday, snatching away a prize his longtime rival had prematurely claimed for himself in a cryptic tweet back on Dec. 29.

Mickelson, who gets $6 million for assuming a familiar position as runner-up to Woods, alluded to putting an additional event on his schedule in order to “get the second half” of the prize money. He also foreshadowed his war of words with the Tour’s top brass, mentioning he would turn his attention to “another hot controversial topic.”

So perhaps deliberations were still ongoing and Mickelson was indeed too quick to let the (ahem) cat out of the bag.

The first-year program spanned the 2021 calendar year, a stretch in which Woods was notably absent from official competition as he continues to recover from the right leg injury he sustained in a single-car rollover crash in February.

For his part, Mickelson had an eventful and mostly positive year before his winter of discontent, becoming the oldest major champion when he won the PGA Championship in May at age 50. It’s unclear when he’ll play next as he picks up the pieces from his recent PR implosion.

There’s still no timetable for when Woods will tee it up again, but clearly his thumbs are in solid working condition.

Woods’ tweet touched off a merciless dunkfest on the embattled Mickelson. Here are some of our favorite burns:

The best of the rest?

The Tour isn’t releasing specifics on where players outside the top 10 finished, but 25-year-old, two-time major champion Collin Morikawa — who was previously reported to be sitting just outside the money at No. 11 — is clinging to his “Co11in” nickname. Harry Higgs, whose shirtless stunt at the WM Phoenix Open was a social media sensation, had some wholesome fun with Wednesday’s PIP results as well.