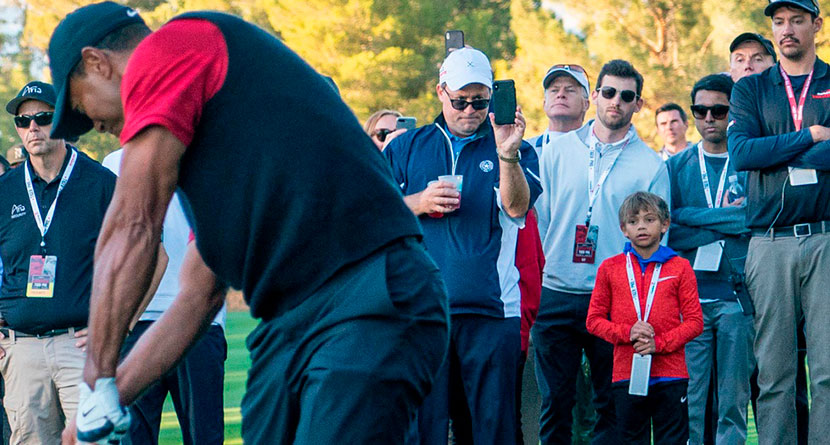 As one Woods’ career winds down, another appears to be ramping up.

The course was appropriately set up for junior golfers at 2,522 yards and a par-36, but Charlie posted the clean card to shoot the lowest score among any of the boys competing in the event.

Charlie Woods mowed down some kids last weekend in a local US Kids Golf event in Florida. Shot 3-under 33 for 9 holes to win by 5! pic.twitter.com/d6hjL2aJWL

With a father as well-known as Tiger, Charlie will always be under some sort of microscope, but it appears that the apple doesn’t fall too far from the tree in terms of golf skills.

The elder Woods bragged on his son’s golf game in a recent interview with GolfTV.

“I wish I had his move.”@TigerWoods talks about coaching his son Charlie and what they’re working on. Watch the full video: https://t.co/fMDSsqfkdZ pic.twitter.com/igqkP2v4Tn

“I wish I had his move,” Woods said. “I analyze his swing all the time. I wish I could rotate like that and turn my head like that and do some of those positions, but those days are long gone, and I have to relive them through him.

“He’s starting to get into it. He’s starting to understand how to play. He’s asking me the right questions. I’ve kept it competitive with his par, so it’s been just an absolute blast to go out there and just, you know, be with him. It reminds me so much of me and my dad growing up.”

The swing of Charlie Woods 👀

Tiger looks on as his ten year old son swings on the range ahead of a junior event in Florida. pic.twitter.com/0WvwCw1hST

On his off weeks, Woods has been spotted in an unfamiliar position on the golf course — as a caddie.

Every few weeks, pictures will surface of Woods and Charlie in lockstep going down a fairway with Charlie playing and his old man carrying the bag.

🚨🔥🐐• #NEW: Tiger caddying once again this morning in Florida on route to a 2nd place finish for Charlie, shooting even par. A SIM driver in the bag already 👀😂. Probably the last update about any of this. He’s young and it’s just important that he has fun. Hopefully something he and Tiger enjoy doing together. (Via @leoniegolf)

While Charlie was winning last week, his dad was shooting a matching 3-under par to post a T37 finish in the first major of 2020 at the PGA Championship. Tiger will be back in action this week at The Northern Trust, the first leg of the FedEx Cup Playoffs.

If all goes according to plan, Woods will do enough over the next two weeks to move into the top-30 in the season-long standings and compete in the Tour Championship at East Lake.

Woods currently sits at 49th in the standings, comfortably inside the top-70 number needed to play this week and next at the BMW Championship, but he has some work to do to get to Atlanta.