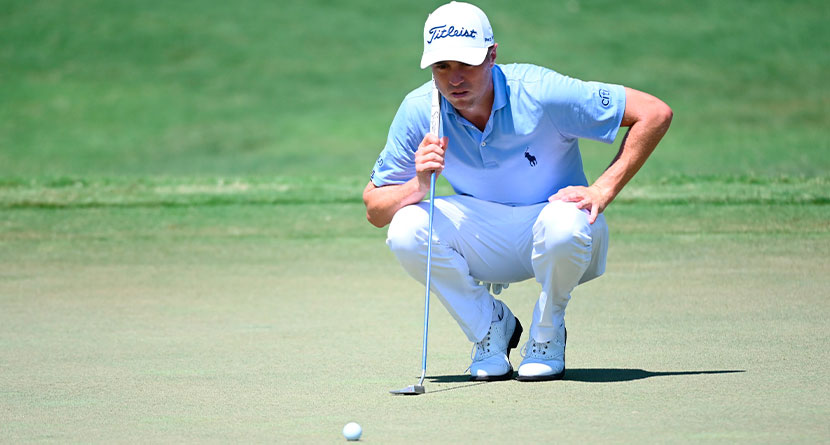 The FedEx Cup Playoffs are marked to the casual sports fan by the silly amount of money up for grabs — all in all, $60 million in bonus money is handed out to the top-125 players in the world with $15 million going to the first-place finisher.

While Dustin Johnson was able to claim the big prize with his second win in the three-event series on Monday at East Lake Golf Club outside of Atlanta, some serious cash was changing hands down the stretch.

Both Scottie Scheffler and Collin Morikawa were able to wrangle an extra $300,000 apiece by making putts on the 18th green, and Tyrrell Hatton made an extra $510,000 with putts on 17 and 18, but the most expensive putts of the week — non-DJ division — came down to the shuffling of three of the top-10 players in the world: Jon Rahm, Xander Schauffele and Justin Thomas.

With Schauffele required to lay up after a wayward drive and Johnson in prime position in the middle of the fairway, the drama moved to the money as the FedEx Cup and $15 million was all but guaranteed to go to DJ as he held a two-shot lead.

It’s gettin good. That 5 footer was worth $300K to Morikawa. Could have a million dollar swing between JT and Rahm here on 18. Some nerrrrrvy putts coming up.

The focus then turned to the money on the line. Ahead on the green, Thomas and Rahm were eyeing birdie putts with potential multi-million-dollar ramifications. Second, third and fourth place paid out $3, $4 and $5 million, respectively, meaning $12 million was up for grabs on the 72nd hole.

With Rahm at 16-under par and Thomas at 17-under par, both faced birdie putts inside 10 feet. Rahm put the pressure on by making his 10-footer for birdie, momentarily tying Thomas for third place.

Thomas answered, however, moving his take-home number from a $3.5 million payday for T3 to a potential T2 payday $4.5 million, the equivalent of what could amount to be a $1 million six-footer.

“I mean, it sucks because I didn’t win,” Thomas said. “You’re obviously playing for a lot of money, but I’m here to try to win the tournament and came up just a little short.”

The money wasn’t done changing hands yet. Schauffele was working to get back into position to make a potential $500,000 birdie. With 68 yards to the green, Schauffele knew exactly where he stood.

“Yeah, I looked up at the board,” he said. “I was hoping to hit my wedge a little closer than I did. I knew I wasn’t going to win, and I figured, might as well try and make that last putt and make a little extra cash.”

Xander’s gotta make birdie to clear the extra $1M for solo 2nd. If Xander doesn’t get up and down, that was worth a million.

Schauffele hit his wedge to 14 feet and failed to convert the birdie, which was the difference between solo second place and a tie with Thomas.

As it worked out, Thomas and Schauffele shared second place, earning $4.5 million each and Rahm came in solo fourth, one shot worse, which was worth $3 million.