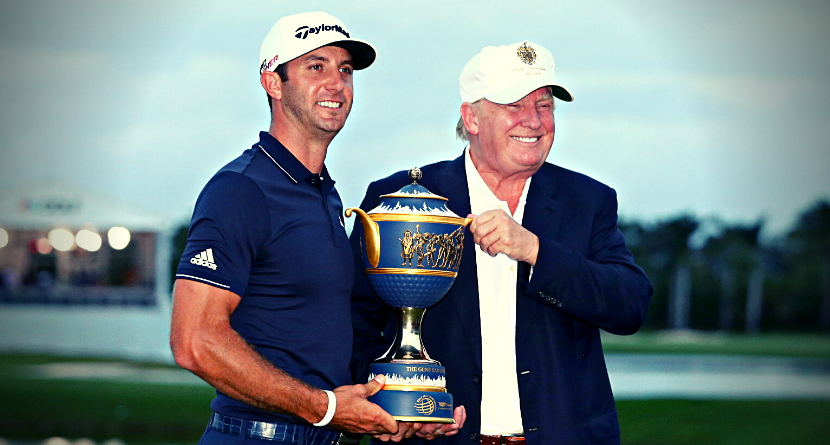 A former U.S. president with an affinity for golf — and startup sports leagues — has some advice for the tour pros who have thus far resisted the advances of the rebel LIV Golf Series: sign up now or you’ll regret it.

“All of those golfers that remain ‘loyal’ to the very disloyal PGA, in all of its different forms, will pay a big price when the inevitable merger with LIV comes, and you get nothing but a big ‘thank you’ from PGA officials who are making Millions of Dollars a year,” former president Donald J. Trump wrote in a post on Truth Social.

Trump properties are set to host a pair of events in the LIV Golf Series’ inaugural season — including the $50 million season finale.

Earlier this year, the PGA Championship was contested at Southern Hills instead of its originally scheduled venue, Trump Bedminister — a change that was prompted by the Jan. 6 insurrection at the U.S. Capitol. And while the PGA of America and the PGA Tour are separate entities, it’s not hard to conclude the 45th president has cast his lot with Greg Norman and Co.

“If you don’t take the money now, you will get nothing after the merger takes place, and only say how smart the original signees were,” Trump added.

Whether or not a compromise is imminent, it’s expected that several impactful signings are on the horizon for the fledgling LIV series. Newly minted Open Champion Cameron Smith fielded a question gauging his interest in defecting during his post-tournament press conference, and his answer hardly quelled suspicion.

It’s also all but assured that the European Ryder Cup captain Henrik Stenson will be relieved of the position when he joins the Saudi-funded circuit. And 2021 Masters champion Hideki Matsuyama is reportedly mulling an offer worth as much as $300 million to jump ship.