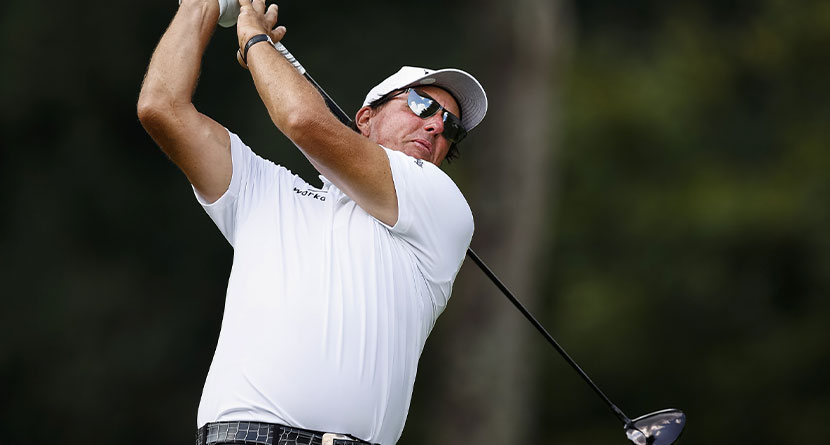 Six months and one day after the comment period ended, the USGA and R&A jointly released a statement that issued a Model Local Rule (MLR G-10) “to provide those running professional or elite amateur golf competitions the option of limiting the maximum length of a golf club (excluding putters) to 46 inches.”

The MLR will go into effect on January 1, 2022 and has already been adopted by the PGA Tour. The PGA of America and Augusta National, the purveyors of the two other major championships not run by the USGA and R&A haven’t made their intentions known as of yet.

As for the LPGA Tour, the circuit will put the local rule into practice “sometime after the 2021 season,” according to Golfweek’s Beth Ann Nichols.

“We’ve worked closely with our industry partners to ensure the future for golf remains strong. Admittedly, this is not the ‘answer’ to the overall distance debate/issue, but rather a simple option for competitive events,” Mike Whan, chief executive officer of the USGA, said. “It’s important to note that it is not a ‘Rule of Golf,’ and as such, it is not mandated for the average, recreational golfer. Rather, this is an available tool for those running competitive events.”

A common refrain in the USGA/R&A media blitz surrounding the MLR announcement was that this was not a deterrent to recreational golfers, but instead a limit intended only for elite competitions.

“Looking at the game and looking at the trends now of golfers at the highest level beginning to explore longer or lengthening their clubs, we thought the time was appropriate to go ahead and allow for a model local rule to be available that we only intend to be used at the highest level, so the professional tours or the elite amateur events,” Thomas Pagel, the USGA’s senior managing director of governance, told Golf Channel.

“Again, this is not a solution, it’s not the solution to Distance Insights. We remain committed to the fact that we see distance long-term creating challenge for the game and we want to identify solutions so that the game can be just as healthy as it is today 20, 30, 50 years from now. … Let’s be proactive, and if we know that golfers have the ability to gain additional yardage by going to a longer club over time, let’s just cap it now.”

While recreational golfers may not be directly impacted, the USGA maintains that the vast majority of pros or elite amateurs won’t be either. Pagel estimated the number of pros or elite ams that use drivers longer than 46 inches is around 3%.

A member of that 3%, however, is one of the game’s most popular and outspoken players, Phil Mickelson, who has been very vocal in his opposition to the length capping.

Operating on information from (as it turns out, a very well-connected) little birdie, the 2021 PGA Champion lambasted the assumption that driver length would be capped. With Tuesday’s announcement, Mickelson doubled down.

“Stupid is as stupid does.”Mrs Gump

Mickelson, who won last week on the PGA Tour Champions, isn’t teeing it up this week in Las Vegas at the CJ Cup, so his comments weren’t completely fleshed out, but other pros offered their opinions on the new MLR.

“I don’t really agree with it,” Justin Thomas said. “I feel like there’s a lot of other things ike the arm-bar putter that they should be approaching as opposed to the length of driver.

“I think the fact that you see only a few people using a long driver speaks for itself, that it’s not really that big of an advantage. It’s a lot harder to hit it straight. In terms of do I think it makes the game of golf and growing the game better? No, I don’t at all, but they seem to have their kind of mind around that for a while now. … If there are guys out here that want to have a chance to put it in play with a 47-, 48-inch driver, then power to them. I had that opportunity; I just chose not to.”

Further, two-time major champion Collin Morikawa opted to not get worked up about the change as he, like most of his peers, will be unaffected.

“It’s not going to change my driver specs, I’ll tell you that, and I don’t think it’s going to change many other guys’ driver specs,” Morikawa said. “Is that the answer to hitting it shorter? No. You know, I think yeah, if you have a long drive and you see what Bryson did, you see what long drive guys do, they have a longer driver, right, and they’re able to hit it farther, but can you maintain that on the golf course? Hasn’t been done yet. Not saying it won’t be done, but you know like if a guy wants a 47-inch driver, I think they should let them because why not?”

While Bryson DeChambeau is a name that routinely comes up when discussing driving distance and driver length, the 2020 U.S. Open champion has opted against putting the 48-inch driver into play. Currently, DeChambeau’s gamer driver has a 45 ¾-inch shaft in it.