Will Zalatoris Admits To Feeling ‘Imposter Syndrome’ Contending Near Tiger 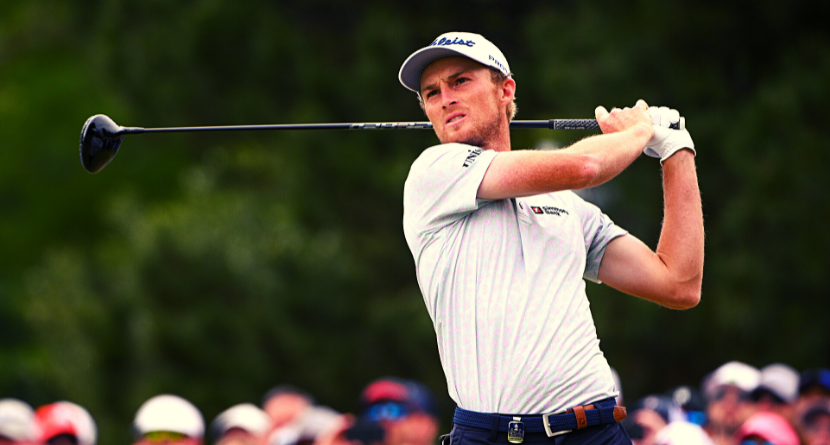 There’s something endearingly normal about Will Zalatoris that makes it hard to reconcile his status as one of the PGA Tour’s rising stars. He’s a skinny kid with a shock of sandy-blond hair who pulverizes his irons and owns up to his resemblance to a certain fictional caddie.

But on the heels of his finest performance as a professional, there was something else the 25-year-old owned up to that ought to make him even more relatable: Zalatoris admits to feeling “imposter syndrome” as he contended for a major championship in the presence of Tiger Woods.

Playing in close proximity to the supergroup of Woods, Rory McIlroy and Jordan Spieth for the first two rounds of the PGA Championship at Southern Hills Country Club, Zalatoris finally got a taste of a phenomenon he’d only heard about from his peers. The big, boisterous galleries. The incessant clicking of cameras. The bubble that forms around Woods and his playing partners and makes their every move seem more important than all the activity happening elsewhere on the course.

Hell, we even saw a fan in Woods’ gallery become the star of a viral marketing campaign for simply watching the 15-time major champion hit a shot instead of trying to film it with a smartphone.

“You’ve heard the vets say, ‘Hey, just don’t watch him, you play your own game,’ and it’s like, ‘Come on, this is the first time I get to see him really play in person and see the crowds,'” Zalatoris said on Wednesday ahead of the Charles Schwab Challenge. “The crowds Thursday-Friday I thought were bigger than Saturday-Sunday, at least in my groups. It was nuts. I played a practice round in front of him Wednesday and it was 35 people deep on [hole eight]. It was just absurd.”

A second-round 65 vaulted Zalatoris to the top of the leaderboard at 9-under-par through those first two rounds spent in Woods’ orbit. But he said his performance only contributed to a feeling of unworthiness.

“Being able to just appreciate those moments [watching Woods] and kind of just be present and enjoy it,” Zalatoris said. “That’s why, to me, I almost had to — it almost felt like I [have] imposter syndrome where I look back on it and go, ‘Wait, you were in a playoff for the PGA Championship?'”

The San Francisco native showed no real signs of nerves as he battled eventual champion Justin Thomas in a three-hole aggregate playoff. He’s still seeking his first victory, but he now has two runner-up finishes in majors under his belt. So the Tiger effect should only get easier to navigate.

“Like I’ve mentioned before, my career goal is to win a major, and now the prep starts for the U.S. Open,” Zalatoris said.