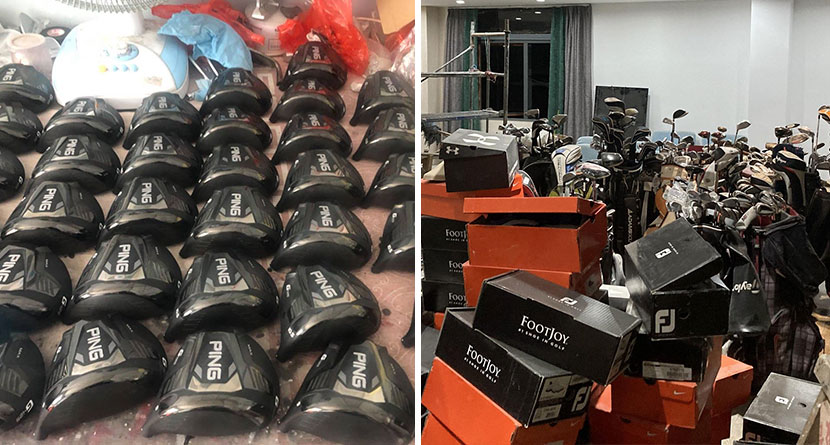 For the third time in 13 months, the U.S. Golf Manufacturers Anti-Counterfeiting Working Group (The Golf Group) announced a successful series of raids that eradicated more than 20,000 pieces of counterfeit golf equipment from potentially finding its way into golfers’ hands.

Back in August of 2020, The Golf Group, in conjunction with Shanghai Police, executed the largest raid in the group’s history, seizing over 12o,000 pieces of counterfeit equipment, which resulted in 15 counterfeiters receiving 42 years in prison. Ten months later, The Golf Group executed another series of raids that took more than 20,000 counterfeit clubs and trademarks off the market.

The Golf Group is made up of six of the largest golf manufacturers in the world, including Acushnet (the parent of Titleist and FootJoy), Callaway (including Odyssey), SRI (Cleveland, Srixon and XXIO), Ping, PXG and TaylorMade.

In its latest raid, The Golf Group announced that, once again working with more than 100 members of the Shanghai Police, a series of six raids were carried out at assembly plants and warehouses in the cities of Dongguan, Guangzhou, Longhui, Shanghai and Shaoyang.

In total, more than 21,281 pieces of counterfeit clubs, components and apparel as well as 51,904 fake trademark labels bearing the names of XXIO, Titleist, Scotty Cameron, TaylorMade, PXG, Callaway, and PING were found and seized.

“As golf continues to grow in popularity, counterfeiters are taking drastic measures to deceive the public and threaten the integrity of the game,” said Daryl Rocco, Senior Paralegal for Callaway. “The enforcement efforts driven by the Golf Group are growing steadily, and we’re thrilled authorities in China are sending the message that producing and selling fake golf equipment is unacceptable.”

Given golf’s boom in popularity during the pandemic, coupled with continued supply chain issues and the holidays approaching, it’s no surprise the amount of counterfeit materials continues to be manufactured by bad-faith actors.

Formed in 2004, The Golf Group has supported the efforts of international law enforcement and government agencies to conduct raids and investigations of counterfeit operations, as well as raise public awareness of the issue. Since its inception, the Golf Group’s efforts led to the shutdown of more than 1,500 websites and authorities have seized more than two million counterfeit golf products.