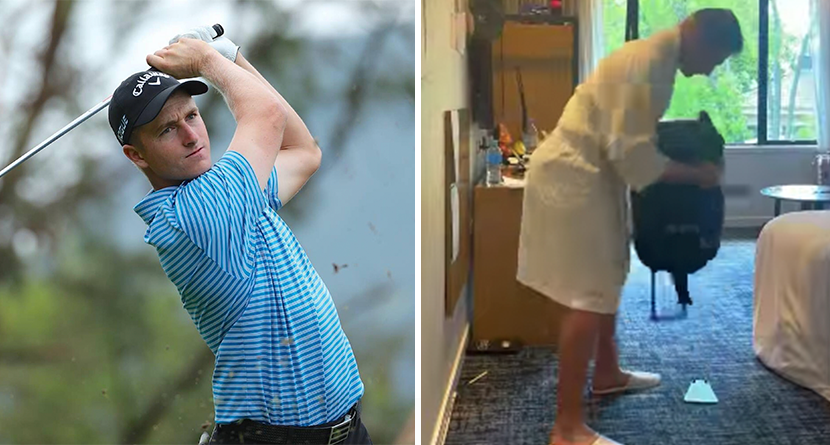 Upon arriving in his native New Zealand after wrapping the Korn Ferry Tour season, Nick Voke faced a week of government-mandated quarantine in a hotel room  — a sterner test of his sanity than the busted elevator that trapped him and his caddie back in April.

“The only difference between this and prison is that I can safely drop the soap,” quipped Voke, 27, a SwingU Versus Ambassador who played collegiately at Iowa State.

Still, professional golfers are uncommonly equipped to deal with isolation. And Voke fits the modern archetype of an enterprising tour pro, blessed with a blend of wit, marketing acumen and digital savvy that’s made him stand out before in golf’s little corner of social media.

“I’ve come to the realization the last couple months that I’ve got a pretty unique platform, and maybe I can start using it and growing it a bit more,” Voke said. “I was actually meditating to start Day 3 [of quarantine]. And then this random thought came to mind. I was working on a putting drill and I had this quiet moment, and I was kind of thinking, ‘I could make something funny out of this.’

“So I started brainstorming and then four hours later, I’ve got this video made and I’m hungry because I haven’t eaten all day, thinking, ‘what am I doing?'”

The resulting 19-second Instagram montage — set to an appropriate soundtrack — starts out with a familiar set-up for any of us who have been holed up in a room with our sticks and a plush carpet whose breaks are just begging to be read. After a conventional attempt with the flat stick, he gives 3-wood a try, nailing his target (a drinking glass from the kitchenette) with a stroke that would make Si Woo Kim proud.

But the progression of putting implements takes a zany turn thereafter, as you can see for yourself below:

Not to spoil too much of the editing magic, but Voke admits there were many takes (and outtakes). In fact, one of his first attempts at creating some snapping action with a sweatshirt produced a strike so hard that the cup needed to be replaced.

Since it was published on Nov. 14, Voke’s video has been viewed by over 10,000 Instagram users, which puts it on track to compete with the 35,000 views the Korn Ferry Tour racked up when its official account shared his elevator exploits this past spring. That he’s now had two videos “go viral” is a testament not just to Voke’s ingenuity but also his willingness to show different sides of his personality than what’s on display inside the ropes.

In the age of player impact programs and bonus pools, it behooves pro golfers of all stripes to follow Voke’s example.

“There are good and bad things to social media, and I believe that anonymity is a privilege,” Voke said. “So it’s kind of like, if you want to be this public figure, you have to give up a lot. But there are good perks to it. Especially in a profession like I’m in, where there are a lot of eyes on me all the time. Whether I’m practicing or competing, it’s just a space that I’m used to. It’s definitely a great platform for me to grow and differentiate myself.”

For now, though, Voke is really looking forward to some rest and relaxation on his home soil. The seven-day quarantine period that greeted him had just recently been reduced from 14 days. Unable to see his parents for two years amid the COVID-19 pandemic, two weeks in that hotel room would have been truly unbearable. Or, perhaps, it could have produced another masterpiece. In any event, everybody should stay tuned.