Brooks, Bryson To Settle Feud In The Match V In Las Vegas After Thanksgiving 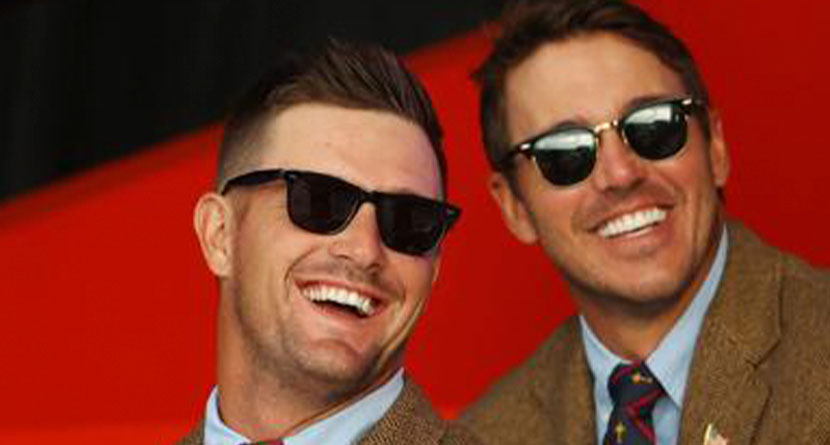 This time, The Match is personal.

Brooks Koepka and Bryson DeChambeau made it official on Tuesday, when Turner Sports announced the PGA Tour rivals will square off for 12 holes in the Match V at The Wynn Golf Club in Las Vegas the day after Thanksgiving (Nov. 26).

DeChambeau shared the news on his social media accounts, accompanying each post with the same message: “Finally what the world has been waiting to see.”

Koepka waited until 10:15 p.m. EST to weigh in, tweeting, “So does this mean we’re having ‘Friendsgiving’”

DeChambeau was victorious in the latest edition, teaming with Aaron Rodgers to beat Mickelson and Tom Brady at The Reserve at Moonlight Basin in Big Sky, Montana, 3 and 2, on July 6.

That’s around the time when the appetite for a DeChambeau-Koepka grudge match was near its peak, their yearslong tiff having been reignited by the leaked Golf Channel footage in which Koepka could be seen rolling his eyes as DeChambeau walked past him while he stood for an interview.

Though it’s now fair to wonder whether the feud is fizzling. In a nod to U.S. captain Steve Stricker, the two agreed to a ceasefire at the Ryder Cup, where both were instrumental in handing the Euros the most lopsided defeat in the modern history of the event. And DeChambeau, who’s accustomed to playing the heel, has continued to engender warmer crowd reactions, riding the momentum of his Ryder Cup performance into a successful debut on the pro long-drive circuit.

The match we’ve all been waiting for. 👀@b_dechambeau and @BKoepka will face off in a 12-hole competition in Las Vegas the day after Thanksgiving.

The abbreviated format may seem curious, but it suggests an effort to streamline what have been cumbersome, if compelling, broadcasts. The Tiger-Phil showdown — a winner-take-all, $9 million match that was initially conceived as a pay-per-view offering before a technical glitch altered plans — was a worthy test case for successive editions. The rest have been relegated to cable, via TNT, and have produced hearty ratings for the network. If Koepka and DeChambeau can rekindle their old dynamic, golf ratings records could be in jeopardy.

Turner mainstays Ernie Johnson and Charles Barkley are once again expected to be involved in the production, according to multiple reports. Coverage is scheduled to begin at 4 p.m. EST, but further details, including specifics on the stakes, are expected to be announced in the weeks leading up to the event.