Have Koepka And DeChambeau Ended Their Feud? 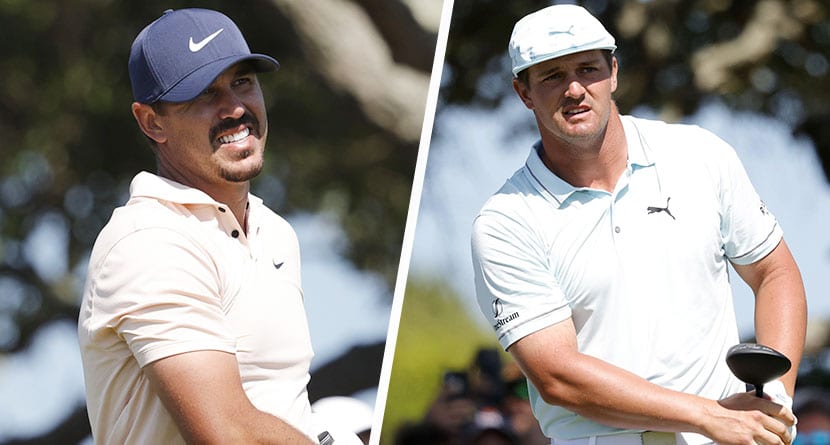 Golf’s most divisive feud may be coming to an end this week at the Ryder Cup.

Brooks Koepka and Bryson DeChambeau have been at odds since Koepka asserted DeChambeau “went back on his word” after a confrontation at the 2019 Northern Trust at Liberty National. We know what ensued since then: cryptic tweets, streaming call-outs, leaked interviews, crashed interviews, encouraged heckling and eventually, a calling off of the dogs by Ryder Cup captain Steve Stricker.

As teammates this week at Whistling Straits, both Koepka and DeChambeau are doing their best to attempt to diffuse the situation if Tuesday’s practice round was any indication.

Meeting with the print media for the first time in weeks, DeChambeau was directly asked about ending the feud with Koepka, and he downplayed the pair’s personal feelings saying that most of the fuel on the fire was coming from the outside.

“A lot of this social media stuff has definitely been driven by a lot of external factors, not necessarily us two,” DeChambeau said. “We had some great conversations Tour Championship week when we had dinner, and then this week as well. I sat down and had dinner with him last night and it was fine.”

DeChambeau then hinted that something may be in the works behind the scenes that would quell any sort of feud.

“I think there may be something up here moving forward, but won’t speak too much more on that,” he said.

Golf Channel’s Todd Lewis attempted to follow up with DeChambeau

“Could Brooks and Bryson be collaborating for an event?” Lewis reported on Live From The Ryder Cup. “I asked Bryson about it and he said, ‘I really can’t talk about it, but I can tell you that it will be incredibly exciting and that the event will happen this year, so stay tuned.'”

As for Koepka’s side of things, he is slated to speak with the assembled media on Thursday, but he threw his weight behind the DeChambeau diffusion mission on social media, quote-Tweeting a U.S. Ryder Cup post.

The next question becomes would U.S. captain Steve Stricker actually pair the two of them together? which appears to be a solid no considering the pod system he’s spoken about in the run-up to the event and how the two have been split already.

If there’s still some ill will lingering, both are doing a good job of tamping it down for the week. And if there’s some kind of Tiger-Phil-esque exhibition in the works later this year for Bryson and Brooks, we’ll get our popcorn ready.