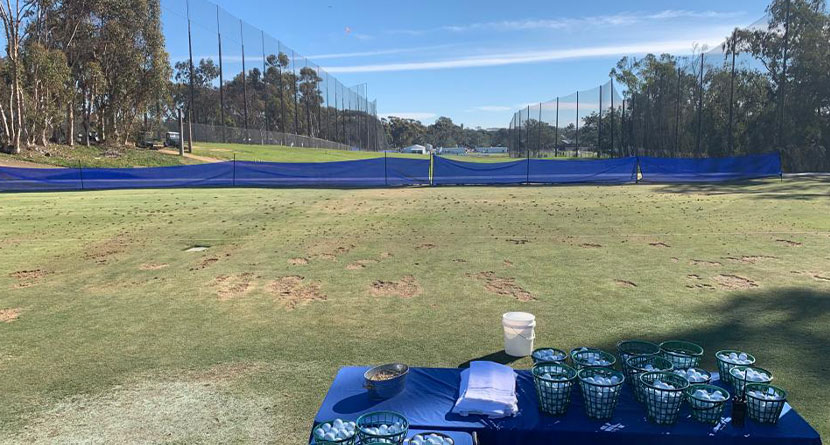 Forget about golf courses becoming obsolete due to the distance the pros are hitting it; the ranges they warm up on already are.

We’ve detailed in recent months the lengths to which courses have gone in order to fence the pros in, with next week’s Saudi International even going so far as releasing a press alert that they’ve extended their range. There was no such public relations push this week at Torrey Pines, but perhaps there should have been.

‘Not a Bryson phenomenon’

While this story has “Bryson DeChambeau” written all over it, the executive director of the Farmers Insurance Open, Marty Gorsich, was adamant that the long-hitting DeChambeau was not the lone culprit despite being an easy target.

Source on the ground informs us that Bryson shattered two caddies’ cars windshields when he started “shipping balls over the fence.”

Caddies cars were parked in dirt lot shown here to the west of the range. pic.twitter.com/e6X2VceyJP

According to GolfDigest.com’s San Diego-based Tod Leonard, recreational golfers occasionally breach the fencing, so it’s no surprise balls were flying out of the range and into adjacent parking lots and even nearby golf holes with the pros in town. Gorsich said the Tour has been in contact with the city “about how it might address the issue in the future.”

“The range is obsolete,” a veteran caddie said. “We were getting pelted with balls the other day.”

As for the damage inflicted during tournament week? The Century Club of San Diego, which operates the event, covers the repair costs, likely with some help from the presenting sponsor, who could shoot it’s next commercial by letting cameras roll in the caddie parking lot…