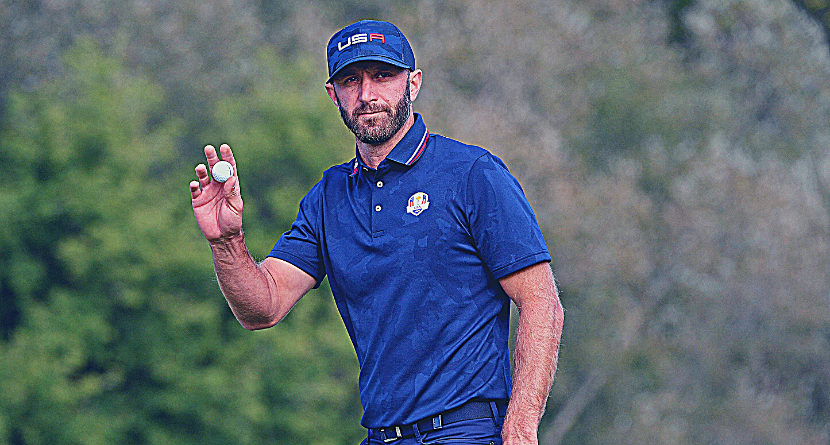 On an American Ryder Cup squad loaded with precocious talent, Dustin Johnson emerged as the fun big brother. The 37-year-old became the first Yank in over 40 years to earn the maximum of five points, and after indulging in some celebratory suds, he provided one of the Sunday press conference’s signature moments.

Asked if he still had the stamina to keep pace with his younger teammates’ champagne consumption, a noticeably tipsy Johnson — to the delight of those younger teammates — censored his own affirmative response.

“Absof….lutely,” Johnson said with a wry smirk. “Next question.”

So will we see this mature yet engaging version of DJ when the Americans attempt to end their string of road losses in Rome next year? At the moment, the answer is Absof….lutely not.

Participating in the biennial matches is a privilege that was forfeited when Johnson, along with a host of other Ryder Cup regulars, resigned from the PGA Tour to pursue a fresh start — and a massive payday — with the fledgling LIV Golf Series.

It was at another press conference where Johnson, who has reportedly signed a deal worth north of $120 million to headline the circuit, announced his resignation Tuesday and reckoned with the Ryder Cup consequences in real-time. Keen to the ramifications of Johnson’s casual admission that he had turned in his Tour card, a reporter asked in a follow-up question whether the two-time major champion was prepared to forgo

“What the consequences are going to be — I can’t comment on how the Tour’s going to handle it,” Johnson said. “I can’t answer for the majors, but hopefully they’re going to allow us to play.

“The Ryder Cup is unbelievable and has definitely meant a lot to me. I’m proud to say I’ve played and represented my country and hopefully I will get a chance to do that again, but I don’t make the rules.”

The golfer is now ineligible to play in the Ryder Cup. pic.twitter.com/LLmlmIDKmF

Pressed further about what his choices say about his devotion to his country, Johnson was as icy and resolute as he was that day in Wisconsin when he was asked about out-drinking his buddies.

“I chose what’s best for me and my family,” Johnson said.

Kevin Na was the first announced participant in the LIV Series’ London opener to reveal he had also taken the seemingly drastic step of renouncing his PGA Tour status, but it’s been noted by multiple members of the golf press corps that it’s likely a legal ploy. The player avoids discipline while leaving himself options for a return. Crucially, they also retain their Tour pension.

Others defectors to follow suit include Sergio Garcia, Charl Schwartzel and Branden Grace. Notably, though, Phil Mickelson told Sports Illustrated’s Bob Harig on Monday that he has not turned in his Tour card.

Johnson, like Mickelson, has stated his intention of continuing to compete in the majors, which invites a new set of questions from governing bodies that don’t necessarily make decisions in lockstep with their counterparts at the PGA Tour. The USGA on Tuesday released a statement designed to end speculation about whether LIV-bound pros would be ineligible to participate in next week’s U.S. Open.

“Regarding players who may choose to play in London this week, we simply asked ourselves this question — should a player who had earned his way into the 2022 U.S. Open, via our published field criteria, be pulled out f the field as a result of his decision to play in another event? And we ultimately decided that they should not,” the statement read. “Our decision regarding our field for the 2022 U.S. Open should not be construed as the USGA supporting an alternative organizing entity, nor supportive of any individual player actions or comments.”