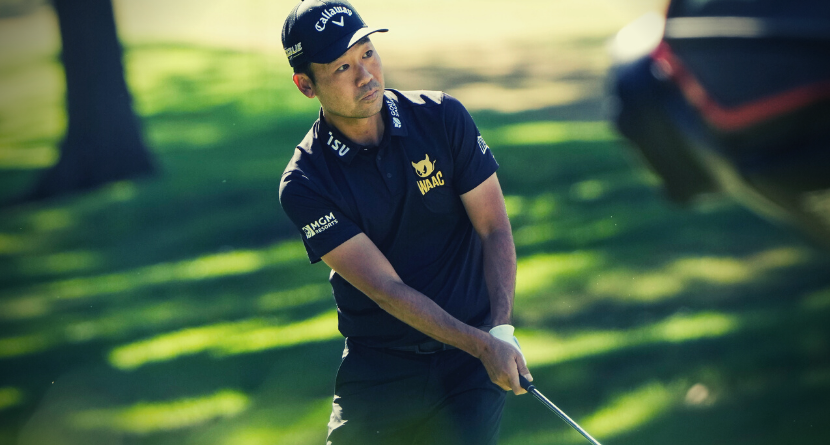 The man known for walking in putts is walking away from the PGA Tour.

Kevin Na, whose name was included in the field announcement for the LIV Golf Series’ $25 million kickoff event in London, took to Twitter Saturday to inform his “fan” (an unfortunate typo, to be sure, but maybe not too terribly far from the truth) that he was taking the drastic step of resigning from the PGA Tour in lieu of facing whatever disciplinary measures might await him and his fellow deserters.

This was a very difficult decision for me. I hope my fans will continue to support me wherever I choose to play. Thank you. pic.twitter.com/3Vp2e7cPfH

“I am sad to share that I have chosen to resign from the PGA Tour,” said Na, 38, a five-time winner on Tour. “This has not been an easy decision and not one I take lightly. I hope the current policies change and I’ll be able to play on the PGA Tour again.”

Na’s maneuver was immediately dissected in golf media circles and by the players themselves, with many speculating some sort of “you can’t fire me, I quit” strategy was afoot. The logic follows that by turning in his card, Na would avoid a lengthy suspension while also leaving himself options for a future return and/or periodic appearances in events that don’t fall under the Tour’s purview.

Still, many of his peers expressed confusion about Na’s drastic decision.

“I don’t understand how you resign,” Joel Dahmen said between rounds at the Memorial. “That’s a bold statement. What if the LIV folds in a year? I mean, can he resign his resignment? I don’t know. Do whatever you want, but I don’t think you have to resign from the Tour to do this.”

“It’s a shame that guys feel they have to be on one side or the other,” said Aaron Wise. “I feel like the Tour has pushed that in a hard way, that you’re picking one side or the other, and I don’t know if Kevin was trying to make a point or taking a stance in what he believes and making a statement, but he obviously felt this is what he had to do.”

Added Rory McIlroy, who serves on the Player Advisory Council: “I guess maybe he’s protecting himself down the road. Maybe some legal issue. He obviously sees the LIV Golf tour as the place he’s going to play on going forward. Look, I get it for Kevin. He’s never been … he’s qualified for the Open Championship a few times and not gone over. He likes to do what he likes to do, and he’s his own person. No, I’m not surprised.”

Sure enough, Golf Digest’s Dan Rapaport — who’s among the sport’s most connected insiders — lent credence to the theory that Na was actually making a cagey choice.

“Word on the street is Kevin Na will keep his PGA Tour pension despite leaving for LIV,” Rapaport tweeted. “By ‘resigning’ he takes away the possibility of punishment; basically a retirement from the Tour, so normal that he’s still entitled to his post-career benefits. Strategic decision.”

Word on the street is Kevin Na will keep his PGA Tour pension despite leaving for LIV. By “resigning” he takes away the possibility of punishment; basically a retirement from the tour, so normal that he’s still entitled to his post-career benefits. Strategic decision. https://t.co/x09119BOfT

“Like I said on the range in Mexico, you won’t be missed Kevin Na!” tweeted Murray, referring to the resumption of their longstanding feud in April. “@PGATOUR our rounds just got 20 minutes faster!”

like i said on the range in Mexico. you won’t be missed @kevinna915! @PGATOUR our rounds just got 20 min faster! https://t.co/cnh4YQcZ5G

In a follow-up tweet, Murray said: “I don’t want to be a bully. I apologize to Kevin Na. I’d be doing the exact same thing if I were him. Also, for anyone who says I suck at golf, y’all are wrong.”