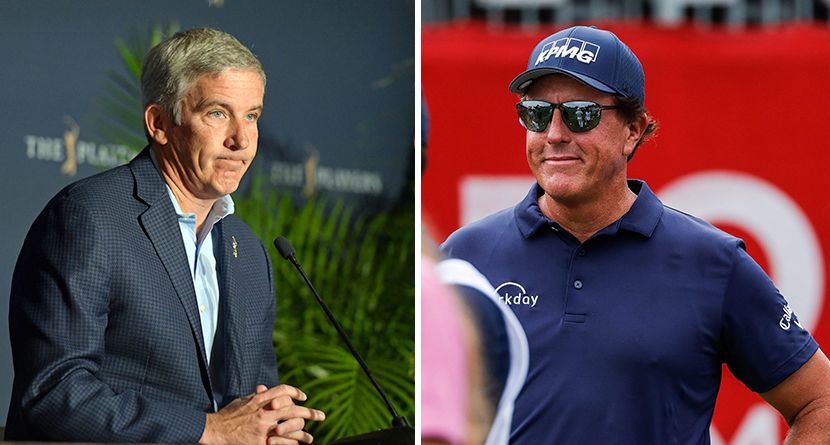 There’s a pathway to reconciliation for Phil Mickelson and the PGA Tour. But it’s on Lefty to initiate that conversation, commissioner Jay Monahan said Tuesday.

Speaking at a press conference ahead of the Tour’s flagship event, the Players Championship, Monahan publicly acknowledged Mickelson’s comments for the first time. All of them. From the inflammatory remarks given to golf journalists to his recently issued apology, which seemed to indicate Mickelson was taking an indefinite hiatus from the Tour.

Mickelson’s intentions to use the proposed Saudi breakaway circuit for leverage in his ongoing quest to revamp the Tour were heard loud and clear. And Monahan said channels are open that would allow for Mickelson to explain himself further. The Tour, however, is moving on without him.

“The ball is in his court,” Monahan said. “He has said that he’s stepping away and he wants time for reflection. That’s something that I and we are going to respect and honor. When he’s ready to come back to the PGA Tour, we’re going to have that conversation. That’s a conversation I look forward to.”

Monahan went on to praise the top players in the world for unifying in their support of the Tour. “We are and we always will be focused on legacy, not leverage,” he said.

Mickelson stepped away “on his own accord,” Monahan said. There was no indication Tuesday that the six-time major winner has been suspended, but the Tour has a longstanding policy of not disclosing discipline.

“Listen, he’s a player that’s won 45 times on the PGA Tour,” Monahan said. “He’s had a Hall of Fame career. He’s won here at the Players Championship. He’s inspired a lot of people and helped grow this tour, his tour. So, as difficult as it is to read some of the things that were said, ultimately a conversation will be had when he’s ready to have it, and I will be ready to have it, as well.”