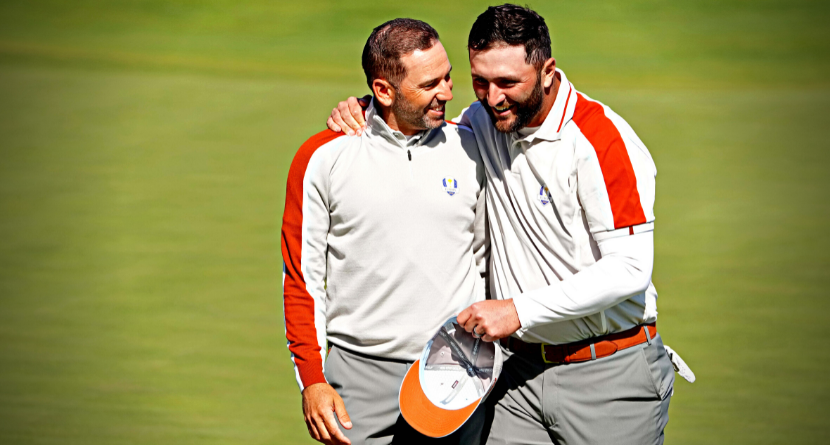 One of the standout moments from an otherwise forgettable trip to Wisconsin for the European Ryder Cup team was Sergio Garcia’s incredulous reaction to Jon Rahm’s clutch putting.

Garcia spread his arms wide and shook his head. “This f—— guy,” the Ryder Cup vet said of his precocious partner and fellow countryman.

The two men are separated in age by 15 years. Rahm, a former world No. 1 who has already bagged a major championship, is still on an upward trajectory while Garcia, whose triumph at the 2017 Masters redeemed an uneven resume, is on the inward nine of his career.

Jon Rahm sinks another sensational putt and #TeamEurope are on the verge of victory in this second fourballs match! 💪

Furthermore, Rahm has been vocal in his support of the PGA Tour while Garcia torched several bridges upon exiting the ranks of the established tours and joining Greg Norman’s rebel circuit, the LIV Golf Series.

Still, the genuine affection we saw at Whistling Straits remains. And Rahm finds himself in a difficult position as someone who still supports a player whose approval rating among his peers has plummeted in the aftermath of his decision to defect — and defect belligerently.

In an interview with Spanish media at the conclusion of the Open Championship, Rahm expressed regret for the way Garcia’s relationships with European golf institutions like the DP World Tour and the Ryder Cup have deteriorated.

“Sergio knows very well that he has dedicated his life to the European Tour in his 25 years as a pro,’’ said Rahm in a series of statements translated from his native tongue and published by Sports Illustrated golf scribe Bob Harig. “That they turn their backs on him that way doesn’t seem right to me. And it is what it is. It is not my decision and that he has to make this decision, it hurts me.

“It’s a shame also because I know that he wanted to play in Spain. And he won’t be able to play either the Spanish Open or at Valderrama. And it bothers me even more that he can’t play the Ryder Cup.”

You can read the full interview here.