Reed Returns To Scene Of His Latest Rules Run-In 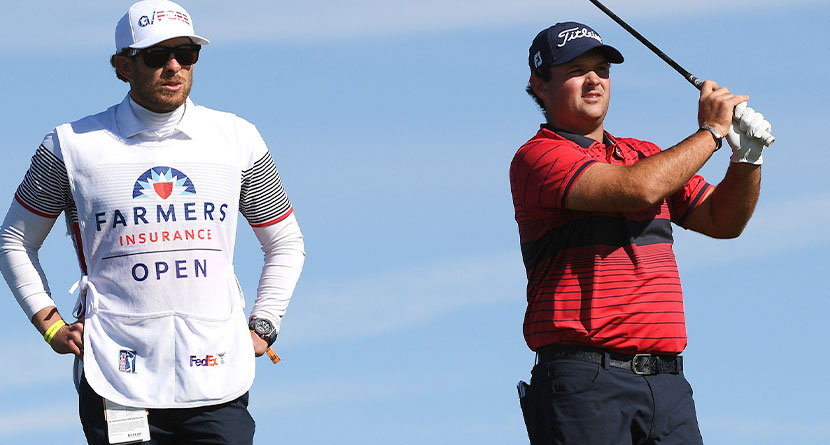 Patrick Reed and controversy seem to go hand-in-hand, so naturally as the PGA Tour returns to the scene of Reed’s most recent rules run-in — last year’s Farmers Insurance Open and the embedded ball fiasco — the defending champion was asked about any stain the subsequent backlash of his questionable drop during the third round had on his five-shot victory 12 months ago.

Unsurprisingly, Reed was staunch in his belief that he has been completely exonerated.

A short retelling: During the third round, Reed’s approach to the 10th hole on Torrey Pines’ South Course drifted well left of the putting surface into thick rough. Upon reaching his ball and the lone volunteer who marked it (remember: there were no fans at this event), Reed asked if the ball bounced.

The volunteer told him no, she had not seen it bounce. Reed inspected the ball, which had settled down in the grass, and felt it had plugged based off of his understanding that the ball had not bounced.

He went about getting relief from a rules official after he had removed the ball from its original position. The official agreed that he felt a “lip,” or that the ball had broken ground and gave Reed a free drop.

Only after being granted relief did video show the ball had, in fact, bounced about a foot off the ground and settled into the grass, almost assuredly not embedding.

The full exchange as Patrick Reed takes embedded ball relief on No. 10. pic.twitter.com/gSPH6PrAoW

The blowback was swift and vicious. Reed was deemed to have once again skirted the rules, and everyone from keyboard warriors to members of the broadcast were skeptical of the legality of what happened.

If anyone was hesitant to cast aspersions, it was Reed’s peers, who despite rumors of whispers on the range, publicly cleared him of wrongdoing.

Reed would go on to blitz the field over the next 27 holes, winning by five shots, something that shouldn’t be forgotten if you ask Jon Rahm, who opted to give Reed the benefit of the doubt as well.

So, here we go again this week at Torrey Pines. Reed is back, operating at 90% following his health scare from last year and with a new-fangled swing thanks to David Leadbetter.

The likelihood that we’ll get another rules controversy is low, plus with fans on-site and Netflix cameras rolling, there will be more eyeballs than ever on Reed — and the PGA Tour — this season.