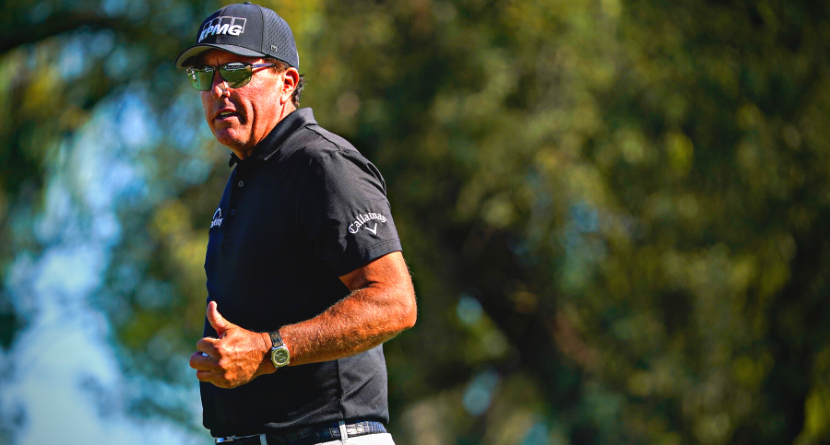 At long last, Phil Mickelson has announced his intention to resume his storied career as a cornerstone attraction for a rival golf league.

Mickelson, 51, broke his silence Monday, confirming in a lengthy statement posted to his Twitter account that beginning with this week’s $25 million kickoff event in London he will be primarily competing in the LIV Golf Series. He is also intent on competing in major championships again despite declining the chance to defend his crown in the PGA Championship last month.

“I realize I still have a long way to go but I’m embracing the work ahead,” Mickelson wrote. “I’m ready to come back to play the game I love but after 32 years, this new path is a fresh start, one that is exciting for me at this stage of my career and is clearly transformative, not just for myself, but ideally for the game and my peers. I also love the progressive format and I think it will be exciting for fans. Just as importantly, it will provide balance, allowing me to focus on a healthier approach to life and on and off the course. I am incredibly grateful for what this game and the PGA Tour has given me. I would like to think that I have given back as well but now I’m excited about this new opportunity. I’m thrilled to begin with LIV Golf and I appreciate everyone involved.”

Over a prolonged stretch of inactivity dating back to his last public statement, it had been widely reported that Mickelson was still in play to serve as a founding member of the controversial startup series despite an explosive interview with author Alan Shipnuck in which he appeared to admit that he was merely using his LIV Golf offer for leverage.

LIV Golf’s inaugural 54-hole, no-cut team event is scheduled for June 9-11 at London’s Centurion Club. But seven more events are set to follow, all of which figure to directly conflict with PGA Tour programming and thus will force the sport’s governing bodies to back up the threat of taking drastic disciplinary action against deserters.

“Phil Mickelson is unequivocally one of the greatest golfers of this generation,” LIV Golf’s embattled yet ever defiant CEO Greg Norman said in a statement. “His contributions to the sport and connection to fans around the globe cannot be overstated and we are grateful to have him. He strengthens an exciting field for London where we’re proud to launch a new era for golf.”

The Twitter account for the popular golf podcast No Laying Up reported that Mickelson’s major championship plans included the U.S. Open at The Country Club in Brookline, Mass., next week, per a source.

Additionally, we learned Monday that Mickelson could be joined on the circuit by one of his former Ryder Cup partners. It was all but assured that one of the last spots in the field for the LIV Golf Series’ London opener was reserved for Lefty. But a report from the Golf Channel’s Rich Lerner turned up a surprising PGA Tour turncoat — Rickie Fowler.

Lerner tweeted the news Monday. “Rickie and Phil to LIV imminent,” he wrote. “How will The PGA Tour respond? The USGA? Chatter consuming the sport.”

Rickie and Phil to LIV imminent. How will The PGA Tour respond? The USGA? Chatter consuming the sport.

It doesn’t appear Fowler, 33, will be ready to tee it up in London, as Mickelson and five additional players who qualified for the event are set to occupy the remaining six spots in the 48-man field. Fowler seemed to be wrestling with the decision to defect in recent weeks, and on a recent episode of the Full Send Podcast, he confirmed he was conflicted.

“I haven’t ruled it out,” Fowler said. “I don’t know what it would take to commit.”

He added: “I still believe the PGA Tour is the best place to play. And I would love to see it continue, but I do think there’s stuff that could change or evolve.”

While his performance has regressed dramatically in recent seasons, dropping him well outside the top 100 in the Official World Golf Ranking, Fowler remains young and marketable — a hit with pint-sized autograph seekers and sponsors alike. He is well-liked by his peers, a few of whom have been critical of Mickelson and his self-destructive tendencies.

It might be harder for the game’s younger vanguard to reckon with whatever ramifications await a player as popular as Fowler.

If the Fowler scoop proves accurate, Lefty and Rickie immediately rise to the level of marquee names in a group headlined by the $125 million man, Dustin Johnson. Others include Louis Oosthuizen, Sergio Garcia, Martin Kaymer, Ian Poulter and Kevin Na, who announced he was resigning from the Tour last week in what now appears to be both a face-saving maneuver and a transparent attempt to retain the PGA Tour pension the 38-year-old has coming to him.