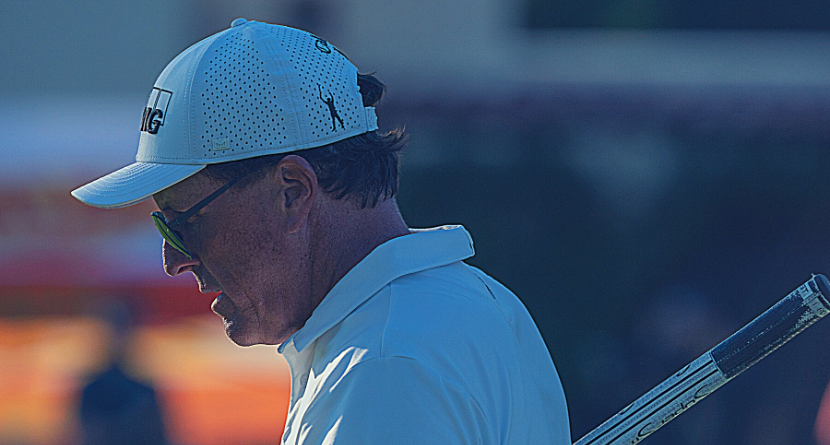 Phil Mickelson emerged from golf exile this week and promptly became meme fodder. A photo of Lefty — resplendent in black leather with his hair slicked back, dark stubble on his chin and the goofy grin he’s used to charm galleries for three decades plastered on his face — was all over Twitter, sparking a barrage of “mid-life crisis” jokes.

But that was tame compared to what awaited Mickelson Wednesday, when he made his first media appearance since February at a pre-tournament press conference for the LIV Golf Series’ $25 million London opener.

Phil Mickelson is back in the public eye and looks generally surprised to be here pic.twitter.com/l7Vsq3jrvN

A ravenous horde of reporters summarily grilled the six-time major champion over a range of issues and news items spanning the whole of his hiatus, and a measured and mostly contrite Mickelson was game to address or deflect them.

Among the most noteworthy answers (or non-answers): Mickelson asserts he has conquered a gambling habit that did, in fact, do serious harm to his finances; he won’t discuss whether he’s been disciplined by the PGA Tour; he does not “condone human rights violations at all;” and he is generally remorseful for a series of quotes related to the controversial circuit that effectively cratered his public image.

“I’ve said and done a lot of things that I regret,” Mickelson said. “I’m sorry for that and sorry for the hurt it caused a lot of people.”

Dustin Johnson, Kevin Na, Sergio Garcia, Louis Oosthuizen and a host of other LIV Golf competitors have admitted to renouncing their PGA Tour membership — likely as a means of avoiding punishment and leaving open the possibility of a return. But in an interview with Sports Illustrated’s Bob Harig published earlier this week Mickelson said he hadn’t taken that step.

Early on in Wednesday’s proceedings, Mickelson said he would not be touching on any Tour-related subject. But he relented when he was asked about the decision not to resign.

Mickelson directly addressed the statement he gave author Alan Shipnuck regarding murdered journalist Jamal Khashoggi. The quote, in which Mickelson referred to the Saudis as “scary motherf——,” exposed his desire to use the threat of a rival league to revamp the PGA Tour. And it was easily the most damning in a succession of gaffes dating back to last winter.

“I’m certainly aware of what’s happened with Jamal Khashoggi, and I think it’s terrible,” Mickelson said. “I’ve also seen the good that the game of golf has done throughout history, and I believe that LIV Golf is going to do a lot of good for the game as well. I’m excited about this opportunity, and that’s why I’m here.”

On the topic of gambling, which resurfaced as a Mickelson storyline when an excerpt from Shipnuck’s unauthorized biography revealed losses totaling $40 million over a four-year period, he was perhaps at his most vulnerable.

“I’ve been handling it for many years now,” Mickelson said. “Me and my family, we’ve been financially secure for — I can’t even remember for how long now. But it was certainly going to be threatened if I didn’t address this. And I did.”

The LIV Golf Series’ inaugural event — which will see 12 four-man teams tangle over a portion of the sizable purse while also awarding individual performances — is set to kick off Thursday at London’s Centurion Club. The team captained by Mickelson, the Hy Flyers, is rounded out by Justin Harding, Ratchanon Chantananuwat and Chase Koepka.

The plan is for Mickelson to tee it up in next week’s U.S. Open, the title that has famously eluded him in the quest for the career grand slam. The USGA on Tuesday released a statement in which it revealed LIV Golf competitors will remain in the field.

Lefty admitted to watching the majors, but he claims he didn’t get the itch to compete again on golf’s grandest stages until recently.

“Every day of the Masters, I skied in the morning and I watched the tournament afterward,” Mickelson said. “I enjoyed watching it. I thought Scottie Scheffler put on an amazing performance there. I found myself missing the Masters but not wanting to be there. I had not played. I had not touched a club. I wasn’t in a position to be competitive. But I will always love that tournament, and if I’m not there, I’ll always miss it, but I didn’t have a desire to be there.”