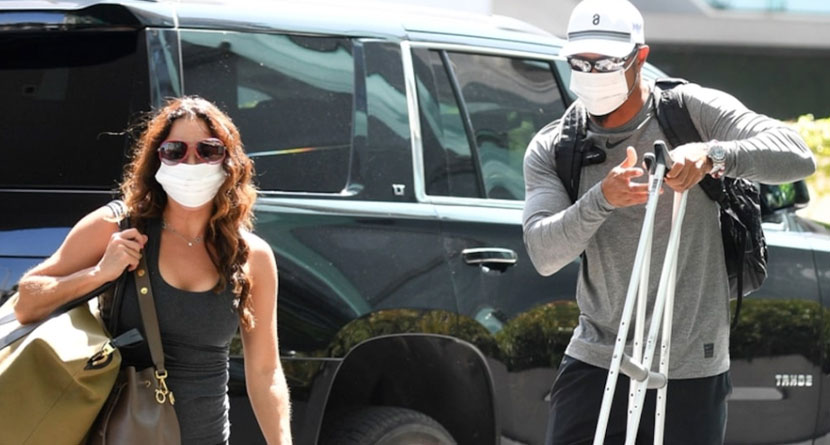 Five months after his single-car rollover crash sent the golf world into a tizzy, Tiger Woods appears to be on the mend, according to a recent update from Florida neighbor Rickie Fowler and pictures that surfaced of Woods earlier this week in Los Angeles.

Fowler spoke to the media ahead of last week’s 3M Open in Minnesota, saying Woods has been working hard to get back to normal, which entails long days rehabbing.

On Wednesday, Fowler’s comments were verified in photo form as a TMZ photographer snapped a few pictures of Woods and his girlfriend, Erica Herman, outside of a Beverly Hills-area hotel with speculation being that Woods was back in L.A. for a doctor’s appointment.

(Press the arrow on the first photo to see more.)

According to the TMZ report, Woods was able to show improvement from the last time he shared any updates publicly in May.

“While he’s still crutching around and wearing a protective sleeve, the 45-year-old showed he’s clearly able to put most — if not all of — his body weight on the leg,” TMZ reported.

Woods required multiple surgeries to repair comminuted open fractures to both his tibia and fibula bones in his right leg his Feb. 23rd single-car rollover crash. He then spent about three weeks in Los Angeles-area hospitals, heading home to South Florida in mid-March.

“This has been an entirely different animal,” Woods told GolfDigest in May. “I understand more of the rehab processes because of my past injuries, but this was more painful than anything I have ever experienced.

“My physical therapy has been keeping me busy. I do my routines every day and am focused on my No. 1 goal right now: walking on my own. Taking it one step at a time.”