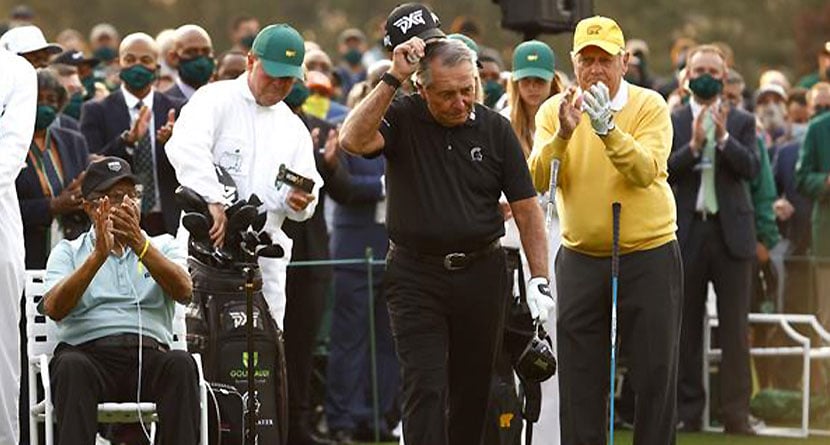 The historic Honorary Starters ceremonial opening tee shots on Thursday of the 2021 Masters was somewhat tarnished by the son and caddie of three-time Masters champion Gary Player.

Wayne Player, Gary’s third of six children, held up a sleeve of OnCore golf balls inauspiciously throughout the ceremony causing immediate backlash as many believed the younger Player was attempting to cash in on a moment that was supposed to be used to honor Lee Elder.

Following the completion of the tournament four days later, the reverence shown for the event by eventual champion Hideki Matsuyama’s caddie, Shota Hayafuji, was in stark contrast to what Wayne had been presumed to be using the same stage for.

Lee Elder is joined this morning by special guests including his family, representatives from Paine College and a group of Black PGA professionals. #themasters pic.twitter.com/C9AJSlypF4

CBS Sports’ Kyle Porter pointed out the disparity in a tweet that received a response from Gary Player’s eldest son, Marc, claiming that his younger brother had been “correctly” banned from Augusta National and The Masters.

Agreed. Wayne has since correctly been banned from Augusta National and The Masters tournament. What a shame. What an embarrassment. What a bad decision to allow him on the first tee after years of similar shenanigans. My apologies to all.

Reached for comment by GolfDigest.com’s Joel Beall, Wayne said that he had no malicious intent.

“The only thought from that point was that it would be cool for fans to know what ball my dad was teeing off with,” Wayne said. “That’s where it ends. If I’ve hurt people’s feelings then I’m truly sorry and hope they will forgive me.”

As for OnCore Golf, its CEO Keith Blakely said there was no directive from the company to continuously showcase the golf ball on the first tee.

“We are aware of the criticisms that have been raised as a result of our product being displayed by Wayne Player at this morning’s ceremonial tee shot at the Masters, most specifically during the introduction of Lee Elder, one of golf’s trailblazers,” Blakely said. “We did not ask or instruct Mr. Player to have our ball sleeve visible during the ceremony and are sorry if his actions caused any offense or was a distraction from the wonderful recognition being paid to Mr. Elder.”

The Player family is no stranger to public disputes.

In June 2020, Gary Player received $5 million the rights to his name and likeness back from a company operated by Marc. Lawyers in the case said the settlement stemmed from a “contractual dispute,” according to an Associated Press report.

According to court documents filed in Florida, Gary Player will get $5 million and the rights to his name and likeness back from a company operated by one of his sons: https://t.co/7nS5l1SSgH pic.twitter.com/ANGh5kva1i

Marc, Player’s eldest son, is the CEO of Black Knight International, “the global holding company for The Player Group and the unique family of PLAYER, Black Knight and Gary Player® brands,” according to Marc’s LinkedIn page.

As for Wayne, he had previously spent five nights in jail in 2019 stemming from fraud charges brought against him for allegedly trying to rent a house in 2018 near Augusta, and the $2,000 check that he used had bounced.

Wayne Player told GolfDigest that he had not heard from Augusta National personally, but, “I’m sure we’ll hear something though as it’s now getting out of hand.”