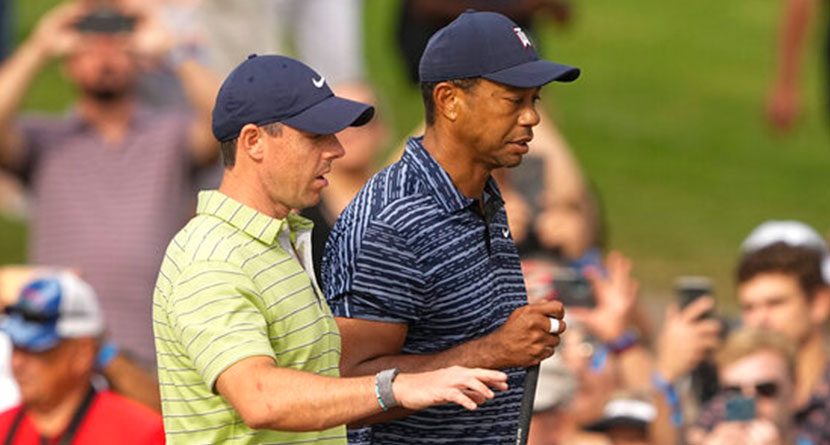 As the FedEx Cup Playoffs have heated up, so has the rivalry between the PGA Tour and LIV Golf.

As part of a lawsuit filed against the PGA Tour, the two biggest figures in golf and staunch advocates for the PGA Tour – Tiger Woods and Rory McIlroy – were served notice of subpoena to give info on the players-only meeting that took place last week at the BMW Championship.

The lawsuit, filed by Larry Klayman, who separately is suing Brandel Chamblee and Golf Channel on behalf of Patrick Reed, is seeking damages against the PGA Tour for “anticompetitive and violative of the antitrust laws vis a vis the LIV Golf Tour and its players.”

There are also alleged concerted efforts to monopolize, collusion, and defamation. The LIV Golf players aren’t satisfied with making their money on the fledgling circuit, they also want the benefit of accruing Official World Golf Rankings points and access to play in major tournaments.

This news comes just after Woods and McIlroy unveiled a new tech-infused golf league, “TGL,” which will feature three-man teams competing in 15 regular-season matches and a playoff starting in January 2024.

On top of that news, Monahan announced significant monetary changes to the PGA Tour. There’s now more guaranteed money (“league minimum” of $500,000 if you play in 15 events), $5,000 for missed cuts, an expanded PIP (Player Impact Program), and “elevated events” featuring golf’s top-20 players. These exciting tweaks directly combat the checkbook allure of LIV Golf and add to a growing overall purse for all PGA Tour players.

“This is not a personal ‘thing’ against Woods, McIlroy and Monahan. It’s about getting information about what occurred at the players’ meeting and generally with regard to allegations in our complaint that the PGA Tour, the DP World Tour and their commissioners Jay Monahan and Keith Pelley, are allegedly colluding in restraint of trade and the antitrust laws to harm the LIV Golf Tour and its players,” Klayman said.

“Just today, the PGA Tour announced changes in its tournaments by again upping winning purses with guaranteed attendance payments for top players, attempting to emulate LIV Golf, while continuing to allegedly harm LIV and its players by, among other alleged anticompetitive acts, working to deny them world ranking points to compete in major tournaments such as the Masters, U.S. Open, British Open and PGA championships. One can perhaps now call the new PGA Tour ‘LIV Light.’

“We look forward to Woods, McIlroy and Monahan telling the truth, with sworn testimony, under oath. Their testimony is not just relevant but also crucial.”

All these changes from the PGA Tour have been in the pipeline for some time. Phil Mickelson was outspoken about the topic of change on the Tour and was reportedly denied when he approached PGA Tour officials. Alan Shipnuck of the Fireside Collective sent a terse Tweet alluding to Phil Mickelson’s calls for change on Tour over the years.

McIlroy touched on Mickelson’s efforts in a press conference:

“Were some of these ideas, did they have merit? Of course, they did. But he just didn’t approach it the right way,” McIlroy said.

Meanwhile, the moment proved too opportunistic for Greg Norman to stay silent. The LIV Tour CEO posted an image on Instagram mocking Jay Monahan and the new changes being made to the PGA Tour.

LIV Golf also released a statement regarding the announced changes and taking some credit for the positive momentum on the PGA Tour.

“LIV Golf is clearly the best thing that’s ever happened to help the careers of professional golfers,” the statement read in full.

Some might say it’s been a net positive despite lawsuits and general chaos. That same crowd would argue that the PGA Tour needed competition to grow and advance, and that’s not an irrational stance to take.

One harsh truth remains: LIV Golf, its pompous CEO, and its players are actively, continuously ignoring and downplaying Saudi Arabia’s deplorable human rights history in lieu of life-changing paychecks. Their goal is not to grow the game, it’s early retirement.

Meanwhile, Rory gave a candid response when asked about the group of players that spearheaded these changes, “As I said, this isn’t some sort of renegade group trying to take some sort of power grab of the PGA Tour. This is, okay, how can we make this Tour better for everyone that’s going to play on it now and everyone that’s going to play on the PGA Tour going forward.”

As the increasingly petty war of words carries on, the PGA Tour Championship kicks off in Atlanta this weekend while LIV hits Boston on September 2-4.