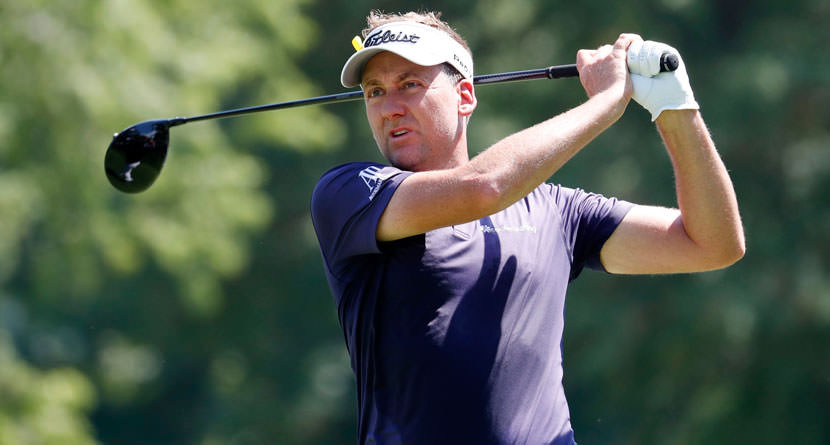 During the third round of the WGC-Bridgestone Championship, viewers had a great opportunity to watch a player “use the rules to his advantage.”

Ian Poulter’s second shot into the par-5 second hole came up short and right of the green and found the thick rough a few feet from the putting surface. As Poulter surveyed the lie, he quickly grabbed a lofted wedge, assumed a wide stance with a fair amount of knee flex, and pointed out how a sprinkler head was interfering with his stance.

(Tommy Fleetwood walked over and acknowledged the presence of the obstruction and continued about his business.)

What stuck out about this is the contrast between the stance Ian used to gain relief and the distance and terrain the shot needed to navigate. A very wide stance, lofted wedge and high short shot would not have suited the 50-plus yards of fringe and green between the ball and flag. Furthermore, the distance was almost all uphill to the green, leading most players to play a lower and running shot.

Let’s be clear, there is no rule being broken and this trick is used more than you would think in tournament play. The Rules of Golf require players to “fairly take a stance,” meaning the player does not improve the lie or line of play as the result of taking the stance. Taking a stance with a club that is not truly the correct club to play the shot for the purpose of bringing an obstruction into play is a gray area and players are left in most cases to operate under the gentleman’s code of conduct.

Under Rule 24-2B/4, the club used to determine nearest point of relief (or if the relief is even given) does not have to be used to play the subsequent shot after relief is taken. So Ian was in the all clear to change clubs and play the shot differently than how he had originally addressed the ball to gain relief. The main point viewers should take away is that the player used the rule to his advantage, but he did not abuse the rule.

You can find examples where rules officials have stepped in and denied players relief at all levels of professional play. One such example is a famous player addressed a ball with a fairway wood so his stance would be on the cart path; the only problem was the distance to the flag was about 75 yards. Needless to say, his playing partners and the rules official were not buying it. Usually, when these situations arise, fellow competitors can step in and keep the player in check as one of their duties is protecting the other players in the field.

We can learn from Ian how the rules can be utilized to a players advantage. As a result of slightly embellishing the stance and shot type, he was able to improve his lie and ultimately his position on the leaderboard.