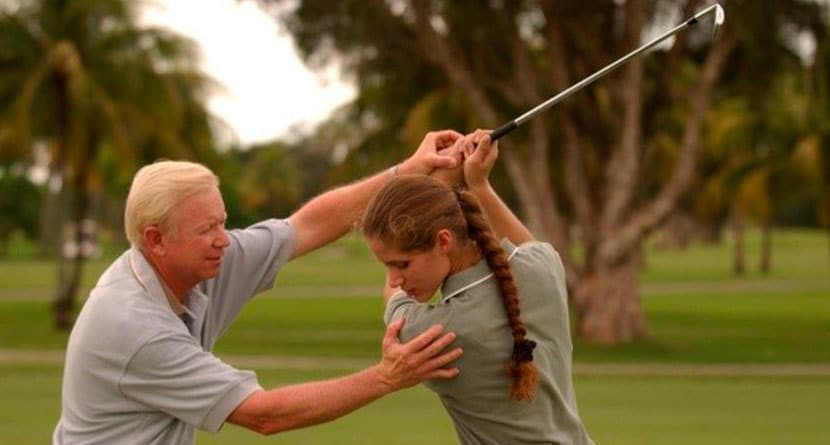 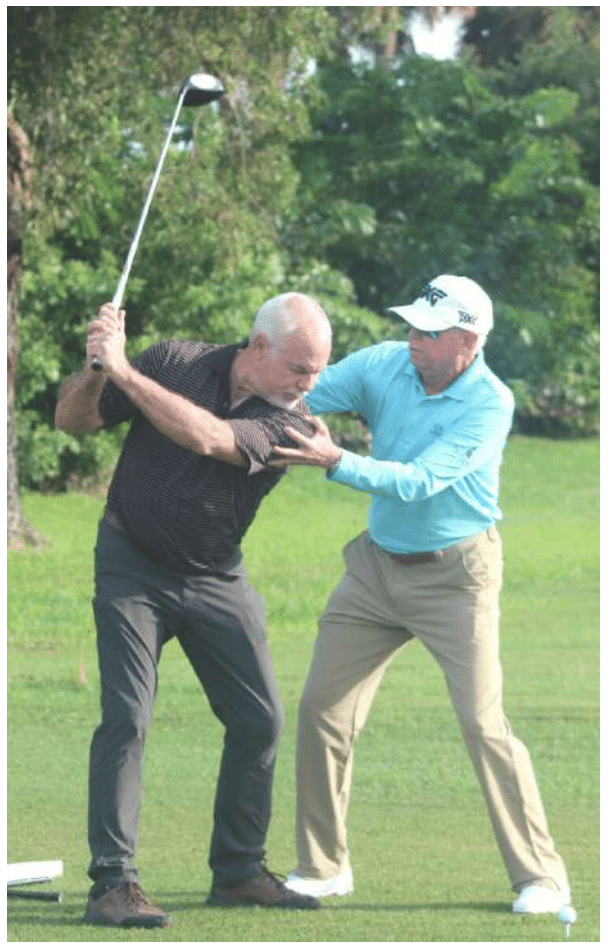 When the arm swing is used up in the backswing, and the hands can’t go back any further, the change of direction will act on the clubhead. The clubhead will fall away from the player. We term this “laying off the shaft,” giving us a flatter or shallower swing plane. Once the motion is underway, the lats and the other muscles involved in the downward movement lose their tension. Any tension in the arms will throw the club off plane and slow down swing speed. Relaxed arms provide huge speed. As Justin Thomas (5’ 10” 150 lbs.) comes into the impact interval, the clubhead is moving at 125 mph with huge momentum on the end of the string. The elbow flexors and the muscles that pull the arms away from the center of the body – biceps, brachialis, and brachioradialis as flexors and the deltoid, with the help from the supraspinatus above the shoulder blade lengthen to slow and ultimately stop the motion. Justin Thomas looks like the clubhead is flying away from him at the halfway position past impact (extension position, Step 7). He uses pure muscle to keep the arms from coming out of the sockets.

By reading this section, you can understand that the shaft reacts just as it does in other ball and stick sports. In baseball, the bat flattens much more due to the baseball being well off the ground. In golf, the natural athletic movement of the body causes the shaft to shallow. Because the golf ball is on the ground, the tendency for most golfers is to flex the macho muscles. It’s very difficult to allow the arms and hands to wait on the power muscles to lead. Whenever the golfer adds pressure at the top of the backswing, as transition occurs, the swing plane will be disrupted.

Whether you are aiming a projectile, playing a lob shot over a bunker to a tight pin location, or playing a piano, “touch” makes the difference between a great performance and a good or average performance. The way you grip the club, the amount of grip pressure, where you feel pressure in each finger, and how you set and release the golf club involves all these muscles. It’s like positioning thrusters on a spacecraft. The big power muscles of the body do the job of first stage booster rockets, the precision muscles act like the tiny jets that adjust the orbit once you are there.

The first touch component might be considered in the wrists, which is, the last power component to be released in the impact interval. Some would say it is all in the wrists, but the muscle interplay that determines the final touch passes through the wrist from above and below.

The hand itself contains some abductor and adductor muscles that move each finger toward and away from the center, respectively; and the pollicis brevis muscles that bunch up at the base of the thumb. It has others, little interosseous muscles to move the finger bones for infinitesimal final adjustments. Their effect, however, depends on movement initiated by muscles that start far up in the forearm, some even at the upper arm. Grasp either forearm with the opposite hand and try moving any finger in any direction- even slightly- without feeling something move in the forearm. You can’t do it. That is as true for guiding a toothbrush as it is for being the number one golfer on the planet.

Considering that the wrist has eight separate carpal bones, none bigger than a pecan, and allows a hand holding a pen to inscribe a full circle, its structure is remarkably stable. A wrist is less liable to injury than an ankle or a knee. A cuff of ligament binds the carpals together, and fifteen flexor and extensor muscles (the tendons of many are prominent) run past them on all sides.

For Tiger Woods to hit a high lofting sand wedge to a tight pin, he cocked his wrist, drawing the back of the hand toward him with extensor muscles running up the back of his forearm. You can clearly feel them working if you touch your forearm as you draw your own wrist back. To move the wrist in opposite direction and launch the ball, Tiger relaxed all those small muscles and ligaments and contracted the flexors on the front of the forearm. From two of them, the flexor digitorum profundus and superficialis, tendons branch out to manage all the fingers: superficialis moves the middle bones of each finger, and profundus does the tips. At the same instant, a supinator (turning palm up) and two pronator (turning palm down) muscles rotated the forearm, like the mast of a satellite dish, for a final fix on the flag stick. Tiger swings and makes perfect contact; the ball stops one foot from the hole. Easy birdie.

Touch muscles, while not especially delicate, are vulnerable to abuse. When injured, fatigued, or overused, any muscle tightens up. The reason may be chemical, or it may be mechanical, such as small hemorrhages in the muscle tissue. In any case, abusing a muscle by overuse can push it from mere tightness to tendinitis, an inflammation in its tendons.