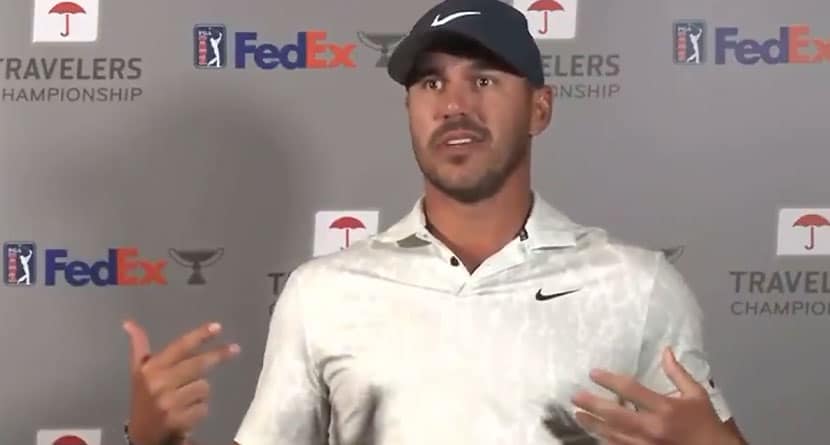 While the constant back and forth between Brooks Koepka and Bryson DeChambeau may be bordering on stale to some diehard golf fans, it’s clear that the general sporting public is still enthralled with the petty rivalry.

Last week’s U.S. Open had plenty of chatter going on around the periphery of the tournament thanks to the potential of a Brooks and Bryson pairing, and similar scores after the second and third rounds had some hoping for a happenstance pairing over the weekend.

Of course, there was also the latest Bryson-Brooks interview run-in as well on Thursday, but nothing too terribly exciting outside of a videobomb came out of the third major championship of the season.

However, there’s no rest for the weary on the PGA Tour as Koepka, DeChambeau and the likes of Dustin Johnson, Patrick Cantlay, Tony Finau, Patrick Reed and a host of other top-50 players in the world traveled across the country for the Travelers Championship in Connecticut.

In making the media rounds, Koepka joined Matthew Barrie on SportsCenter on Tuesday with the elephant in the room making an appearance as the host laid out a scenario that seemingly would result in a ceasefire. Instead, Koepka pointed fingers.

“There’s not much to talk about,” Koepka said of the hypothetical peace offering. “Everything that’s gone on… this whole thing started basically because of him, so I’ll leave it at that. I don’t see us having dinner or drinks just to settle it.”

On Wednesday, Koepka had his virtual pre-tournament press conference. In a short, four-question presser, Koepka was asked by Golf Digest’s Daniel Rappaport about the SportsCenter interview and if he could expand upon the genesis of the feud between he and DeChambeau.

Dan doing the lords work with the question we all wanted answered, “what started the beef?”

Then the tour scrubbed the audio when Brooks went into more detail but left him hanging on the video feed!@Daniel_Rapaport pic.twitter.com/jeXW4gXOyN

“I thought it was just interesting when he walked up to my caddie (at the 2019 Northern Trust at Liberty National) and told Ricky that if I had something to say, to say it to his face,” Koepka said.

The confrontation stemmed from Koepka making comments about a video of DeChambeau taking an inordinate amount of time to hit a wedge shot that had recently gone viral.

“I thought that was kind of odd. You don’t walk up to my face, (you) say it to my caddie. When we had that conversation we agreed on something and he went back on it. So, you know, if you’re going to go back on your word I don’t have much respect for that.”

There was no follow-up question to what DeChambeau went back on.

“I thought that was a pretty good answer,” Koepka said before asking if the interview video was off.

Interestingly, the PGA Tour allowed the video to continue to record as Koepka continued to speak to someone off-camera after the interview ended although no further information about what was said has been made available.

Once again, both DeChambeau and Koepka are in the field this week in Hartford, and once again, they are on opposite ends of the draw, meaning that if fans are going to get the Brooks-Bryson pairing they’ve been clamoring for, it will have to come about on merit alone with their scores matching them up.