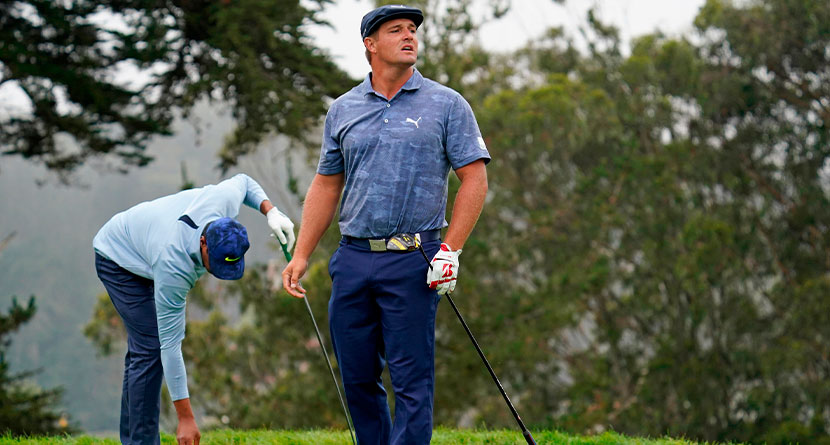 For someone so concerned with his “brand,” Bryson DeChambeau is doing the opposite of protecting it lately.

Whether it was his run-in with a cameraman at The Rocket Mortgage Classic, his bickering with a rules official at the Memorial en route to a 10 or his attempt at relief from an anthill at the WGC-FedEx St. Jude Invitational — and those all happened in July — DeChambeau has transformed himself somewhere between a sideshow and a wrestling heel.

On Thursday at The Northern Trust, DeChambeau added another piece to his soundbite compilation as he made his way around TPC Boston during the first leg of the FedEx Cup Playoffs.

A pair of frustrating bogeys took DeChambeau from 1-under par through three holes to 1-over par through five, and with the reachable par-5 7th on tap after a ho-hum par on the par-4 6th, DeChambeau was running a little hot. His tee shot found a fairway bunker, and despite a solid recovery, DeChambeau failed to find the putting surface from 74 yards away.

His birdie chip ran by the hole some seven feet away, and DeChambeau turned his attention to a couple of rabble-rousers nearby who distracted him.

Bryson being Bryson @TheNTGolf:
“Do you mind talking a little quieter over there please. I can hear you from all the way over there, sound travels.” pic.twitter.com/SfDaJXvnHM

“Do you mind talking a little quieter over there, please?” DeChambeau asked with a tinge of frustration in his voice. “I can hear you from all the way over there. Sound travels.”

It’s unclear who he was talking to, but without spectators on the property, it was likely a volunteer or media member.

A relatively benign request, sure, but since it’s Bryson, the clip blew up, mostly because of his closing line: sound travels.

Mostly because it was DeChambeau, golf’s Twitter users piled on, as they are wont to do.

Bryson DeChambeau just asked some spectators to be quiet and it really bothered me. I respect the quiet nature of golf, but if you can’t handle a little bit of chatter 50 yards away then just pack up your clubs and go home.

It isn’t a golf Thursday without Bryson Dechambeau yelling at someone after his swing.

Name a bigger crybaby than Bryson DeChambeau. Such a loser https://t.co/k82mgtDQaa

Of more immediate concern to DeChambeau is his weekend prospects as he was unable to get anything going on Thursday, firing an even-par 71 and needing something in the 60s on Friday if he is to have any chance of making the last cut of the PGA Tour season.