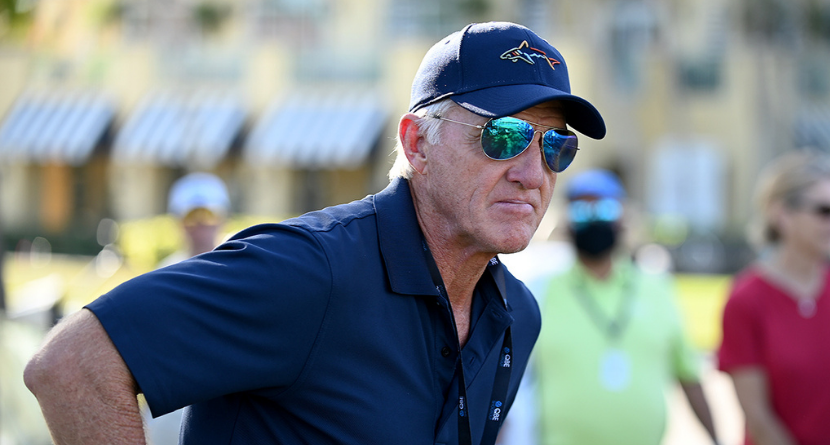 Starting a letter with the phrase “surely you jest” is a clear sign that the sender is, well, not jesting. And sure enough, what followed in a screed addressed to PGA Tour commissioner Jay Monahan from Greg Norman that surfaced Thursday only got more hostile from there.

“Surely you jest,” Norman wrote in the letter obtained by numerous golf outlets. “And surely, your lawyers at the PGA Tour must be holding their breath. As has been widely reported, you have threatened the players on the PGA Tour, all of whom are independent contractors, with lifetime bans if they decide to play golf in a league sponsored by anyone other than the Tour.”

“Commissioner – this is just the beginning. It certainly is not the end.”

The Tour, of course, is forging onward as if it has swatted away the Saudi splinter league threat. But Norman, the CEO of LIV Golf Investments and the rogue circuit’s de facto commissioner, called into question the legality of threatening Tour players with lifetime bans should they defect — a stance that was reaffirmed in a mandatory player meeting at the Honda Classic on Tuesday.

In his letter Norman asserted the Tour was guilty of “bullying” and “intimidation” among other tactics. He intended to fight for the players’ rights, just as he fought for his own through mostly futile attempts to mobilize his fellow pros and launch a global alternative to the Tour three decades ago.

It’s Norman’s belief that the Tour has “put its own financial ambitions ahead of the players, and every player on the tour knows it.”

“Why do you call the crown jewel in all tournaments outside the majors ‘The Players Championship’ and not ‘The Administration’s Championship?'” Norman wrote.

Where does Norman go from here?

Let there be no doubt: Norman is not backing down anytime soon. The signoff to his letter makes that abundantly clear. “Commissioner – this is just the beginning,” Norman wrote. “It certainly is not the end.”

Whether he believes his own bravado is another matter. Losing out on the support of Dustin Johnson and Bryson DeChambeau, followed closely by Phil Mickelson’s self-described “reckless comments” to Alan Shipnuck and subsequent apology, seemed to signal the end was near. But as Brooks Koepka aptly noted earlier this week, all it takes is one “sell-out” to get the ball rolling again.