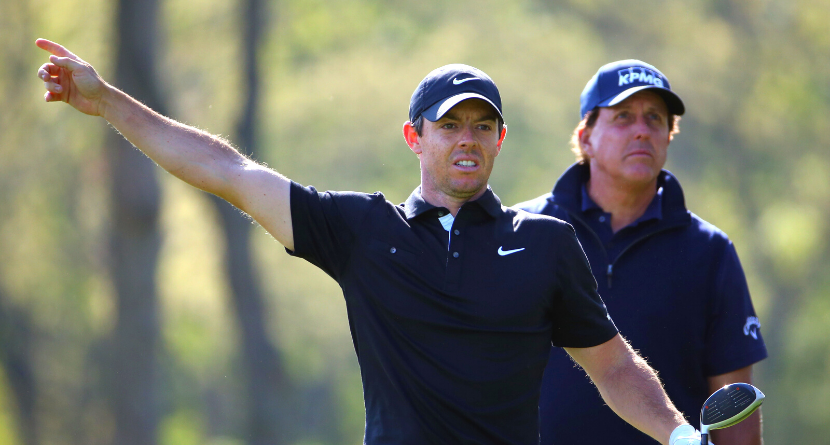 “I don’t want to kick someone while he’s down obviously…” Rory McIlroy started to say, and it was easy to imagine him limbering up like an NFL punter before booting a 60-yard bomb.

The comments made by Phil Mickelson in his ongoing crusade against the PGA Tour were, in McIlroy’s words, “naive, selfish, egotistical, ignorant.”

“A lot of words to describe that interaction he had with [writer Alan] Shipnuck,” he continued. “It was just very surprising and disappointing, sad. I’m sure he’s sitting at home sort of rethinking his position and where he goes from here.”

Ouch. From McIlroy of all people — one of the PGA Tour’s most measured and thoughtful speakers — that word flurry really had to land flush on Mickelson’s chin. Now would you like to see the less diplomatic version? Here’s Billy Horschel:

“I’ll put it this way. They were a little bit idiotic,” Horschel said. “Some of the statements [Mickelson] made are lies or false. I don’t know where he got his information from. It’s unbelievable that he would say certain things because he understands how the PGA Tour works. For him to say certain things about obnoxious greed and the PGA Tour is sitting on $20 billion and some other things, are complete lies.

“I may not see all the numbers that a Player Director might see in board meetings, but I see enough to understand the money is being used correctly. And it’s being used how the PGA Tour says it is. It’s tough because Phil has been a great ambassador to the game of golf and I honestly feel he’s hurting his reputation and tarnishing his legacy a little bit.”

So Which Players Still Support A Splinter Tour?

In addition to Mickelson, players who have been linked to the Saudi tour and have yet to publicly distance themselves from it include Ian Poulter, Lee Westwood, Jason Kokrak, Henrik Stenson and Patrick Reed. So, not exactly a must-see cross-section of the sport. As Jordan Spieth put it at Riviera this past weekend, “I don’t know, considering how many of the top 10 to 50 players in the world have now committed publicly to the PGA Tour — including [DeChambeau and Johnson] — I don’t know who they are getting to fill it out and make it worth it.”