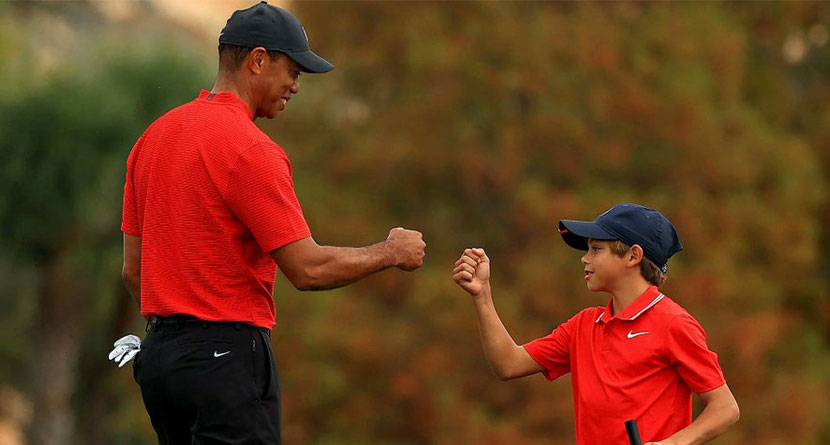 Just under 10 months ago, Tiger Woods was lying in a Los Angeles hospital, his right leg pulverized after rolling a courtesy car from the prior week’s Genesis Invitational at Riviera down an embankment on his way to a celebrity golf content shoot.

Then on Wednesday, a few weeks after video of Woods walking was captured by paparazzi, and a little over a week after he posted a video of him hitting an iron shot, Woods announced that he would be playing in a golf tournament next week with his 12-year-old son Charlie.

“Although it’s been a long and challenging year, I am very excited to close it out by competing in the PNC Championship with my son Charlie,” Woods tweeted. “I’m playing as a Dad and couldn’t be more excited and proud.”

Ironically, the PNC Championship was the last tournament, official or unofficial, that Woods competed in, finishing tied for seventh alongside Charlie last December. Shortly thereafter, Woods underwent his fifth back surgery, “a microdiscectomy procedure to remove a pressurized disc fragment that was pinching his nerve after experiencing discomfort following the PNC Championship,” a statement released at the time said.

Just over a month later, Woods was involved in the car accident that sidelined him for the majority of 2021.

In recent weeks, Woods’ progress has made it into the public eye, most notably last week at the Hero World Challenge, an event that benefits Woods’ foundation. While scant on specific details throughout the week, Woods hinted that he could play in certain “hit-and-giggle” events right away, but he remained a long way from Tour-level golf.

With the chum in the water, Woods committed officially on Wednesday, allowing for a myriad of photos and videos of Woods and his son to make the rounds, including this from the PGA Tour:

“We have been liaising with Tiger and his team for some time and are delighted that he has now decided to make his return to competitive golf at the PNC Championship,” Alastair Johnston of IMG, the executive chairman of the event, told the Associated Press.

The PNC Championship is a 36-hole two-person scramble that features some of the biggest names in golf, this year including (aside from the Woodses) Justin Thomas, Nelly Korda, Matt Kuchar, Gary Player, Lee Trevino, John Daly, Jim Furyk, Tom Watson, Nick Faldo and many more.