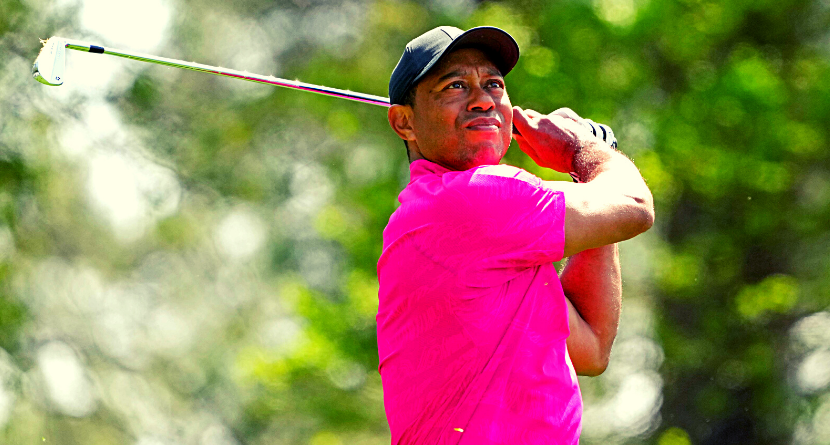 He showed up to the first tee in an azalea-pink mock turtleneck, flashed that familiar look of exasperation when his drive found the rough and proceeded to scramble for a pain-free par.

It felt so normal watching Tiger Woods make his 24th Masters start on Thursday morning, yet it can’t be overstated: there simply aren’t enough odds in the universe to stack against him at this point.

In his first competitive round of golf in 508 days, Woods carded a 1-under-par 71 to put himself in a tie for 10th, four shots off the pace set by leader Sungjae Im. Never mind the fact that he was testing out his reconstructed right leg for the first time on a notoriously hilly track, Woods’ score is all the more remarkable when you consider he missed half of the greens.

Tiger Woods begins his 24th Masters with a par on the first. #themasters pic.twitter.com/gTva7ZznsP

It was the first official outing since the 2020 Masters for Woods, who, as recently as February, was expressing frustration about where he stood in his recovery after undergoing multiple surgeries on his right leg, the result of a single-car rollover crash in Southern California back in February 2021.

“If you would have seen how my leg looked to where it’s at now, the pictures, some of the guys know,” Woods said after the round. “To get from there to here, it was no easy task. People have no idea how hard it’s been. My team does. They’ve worked with me every single day. I’ve said this before, we haven’t taken a day off since I got out of the bed after those three months.

“I did something positive today.”

A spirited performance at the PNC Championship alongside son Charlie whet appetites for a comeback, even if, as Woods was quick to point out, anything resembling a full schedule was now out of the question.

Still, this latest comeback, from the deepest depths he’s ever been in, seemed to materialize from out of the ether. Rumors begat private jet tracking begat practice rounds begat the real thing, all in a matter of days.

A pinpoint 6-iron at the 180-yard, par-3 sixth set up a tap-in birdie and elicited a vintage roar from the massive galleries trailing Woods and his playing partners, Louis Oosthuizen and Joaquin Niemann. And a long birdie putt at the par-3 16th was cause for the day’s first fist pump, much to the delight of the patrons.

The 15-time major champion struggled to make hay on the par 5s, which have so often buoyed his performance in the course of capturing five green jackets. His iron play was also less than crisp, leading to a handful of impressive par saves.

A raucous ovation greeted Woods at the 18th green after he spun his pitch to about five feet to set up a closing par.

Woods appeared to briefly clutch at his back after hooking his tee shot on the par-4 ninth hole, the grimace on his face giving him away as he walked up to play his second shot from the pine straw. But all in all, there was scant visual evidence of discomfort throughout the round.

The round was delayed about a half-hour due to heavy rain the night before. Woods is scheduled to tee off at 1:41 p.m. on Friday. Im opened with a 5-under-par 67 to finish one stroke ahead of Australia’s Cameron Smith, who bookended his eight birdies with double-bogeys on the first and last holes.