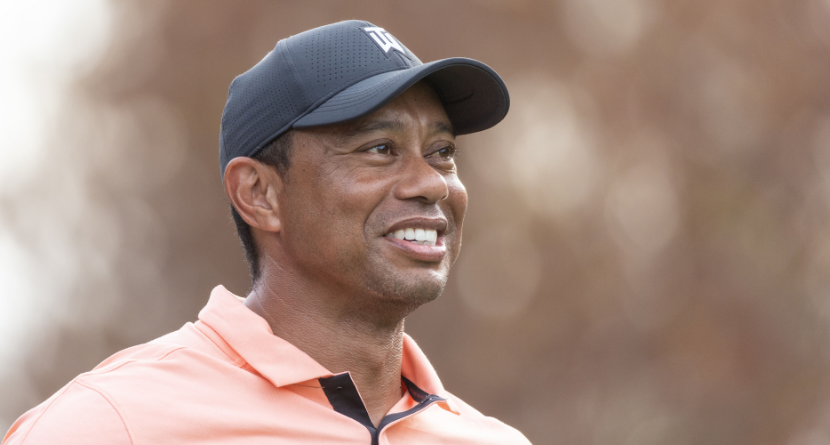 To mark the occasion of Tiger Woods’ 46th birthday, we thought we’d look back at another typically atypical year in the life of golf’s mercurial megastar.

By now we’re almost numb to the notion of early retirement. But a calamitous rollover crash in February cast more doubt on Woods’ career prospects than any back surgery or off-course scandal.

Yet here Woods was in December, staging a dramatic Sunday charge at the PNC Championship co-starring his 12-year-old son Charlie, firing darts and draining putts while standing on a leg he nearly lost.

It’s easy now to forget — in the afterglow of another week of synchronized cuteness — that players wore red-and-black in tribute to Woods for the final round of the WGC-Workday Championship, a poignant gesture that also carried a haunting, almost funereal weight.

It is hard to explain how touching today was when I turned on the tv and saw all the red shirts. To every golfer and every fan, you are truly helping me get through this tough time.

Once it was assured Woods would regain the use of his severely injured right leg, dribs and drabs of news about his recovery would come from peers in the form of late-night TV interviews and podcast appearances. Then, in late November, came the swing video that lit up Twitter and prompted worldwide headlines. The faint flicker of a PGA Tour return had materialized.

An exclusive interview with Golf Digest soon followed, along with a pledge to fulfill his hosting duties at the Hero World Challenge, where Woods let it be known a “hit-and-giggle” was within the realm of possibilities but everything else was up in the air. Now, after riding for 36 holes in Orlando, cautious optimism abounds.

Let there be no doubt: Woods’ playing status has assumed its rightful place as the story in golf. So let’s recap the wild year that brought us here:

Tragedies, particularly those involving public figures, unfold in real-time nowadays. That’s a sad but very real side-effect of warp-speed news cycles and social media platforms that have neither the ethical nor journalistic responsibilities that mainstream media outlets do. So when words and images began to circulate on the morning of Feb. 23, many feared the worst when it came to the high-profile victim of a violent wreck in the Rancho Palos Verdes suburb of Los Angeles.

Woods’ longtime agent, Mark Steinberg, assuaged those fears when he released a statement on his client’s behalf. “Tiger Woods was in a single-car accident this morning in California where he suffered multiple leg injuries,” Steinberg said. “He is currently in surgery and we thank you for your privacy and support.”

The hazy details of the crash still invite curiosity, though Woods doesn’t feel he owes any explanation beyond what’s available in police reports. Definitively, the vehicle involved was moving with excessive speed as it traveled around a curve, resulting in a tumble down a steep embankment. The jaws of life were required to extricate Woods from the wreckage.

Golf is the rare sport in which legendary careers are drawn out over decades, allowing for generational overlap. As such, we’ve watched Tiger fans morph into contemporaries. And that was no more evident than when the likes of Rory McIlroy, Tommy Fleetwood, Cameron Champ, Tony Finau, Jason Day, Justin Thomas and even longtime rival Phil Mickelson were among the players who adopted Woods’ trademark Sunday attire while the 15-time major champion watched from his hospital bed.

“We’re very lucky that he’s still here,” McIlroy said. “I feel like we should pay tribute to him every day for being on the PGA Tour and what he’s done for golf.”

March 9: An Update From Rory

Appearing on the Tonight Show with Jimmy Fallon, McIlroy was asked by the golf-obsessed host for an update on Woods’ condition.

“I’ve spoken to him a little bit,” McIlroy said. “He’s doing better. I think all the guys have reached out to him and hopefully, if things go well over the next week or so he might be able to get home and start recovery at home, which would be great for him, so, see his kids, see his family.

“He’s doing better and just I think all of us are wishing him a speedy recovery at this point.”

May 29: Breaking The Silence

Golf Digest’s Daniel Rapoport landed the first interview with Woods in May and extracted some intriguing tidbits from his notoriously private subject. By then Woods had been spotted in public sporting a pair of crutches and a walking boot, but he offered a stark assessment of how this rehab process compared to the many others he’s had to endure.

“This has been an entirely different animal,” Woods said. “I understand more of the rehab processes because of my past injuries, but this was more painful than anything I have ever experienced.”

Woods is surrounded by famous golfers in his Jupiter, Fla., neighborhood, so it was only a matter of time before one of them came forward with a useful nugget or two pertaining to the Big Cat’s recovery.

“I know he’s been getting after it as far as rehab goes — that takes up most of his day,” Fowler told reporters at the 3M Championship in Minnesota. “I know as kind of stubborn as he is, being as big of a kind of golf nerd as all of us are, he’s putting the work in. I know it’s been tough. It’s a long road until now, he’s got a long road ahead, but he’s putting the work in.”

Sure enough, TMZ would publish proof of that progress about a week later. Woods was reportedly able to put more weight on his right leg than had previously been observed.

Dissected and debated like the Zapruder film, the three-second clip Woods posted on Nov. 21 — accompanied by the simple message “making progress” — was proof that the golf world was starving for any morsel of news pertaining to his actual game.

The compression sleeve on the right leg was a new look, but the rest appeared remarkably normal. The only thing missing was a club twirl.

Though at times a little testy — such as when a reporter dared to ask about the crash itself — Woods was generally forthright and upbeat in speaking to the assembled press in the Bahamas as part of his Hero World Challenge hosting obligations.

The conversation took an interesting turn when Woods was asked what advice he would give a younger player contemplating a defection to a rival tour.

“It’s going to be his decision, period. I’ve decided for myself that I’m supporting the PGA Tour, that’s where my legacy is,” Woods said. “I’ve been fortunate enough to have won 82 events on this tour and 15 major championships and been a part of the World Golf Championships, the start of them and the end of them. So I have an allegiance to the PGA Tour.

“And I understand that some of the comparisons are very similar to when Arnold and Jack broke off from the PGA of America to start the Tour. I don’t see it that way. I think the Tour has done a fantastic job, Jay’s done an unbelievable job during a very difficult time during the pandemic.”

Tournament host @TigerWoods meets with the media at the Hero World Challenge. 🎤 https://t.co/8T05NMTFKf

As downright gleeful as it made golf fans to see Woods back in action so quickly after everything that transpired 10 months earlier, that narrative became the B-plot when his 12-year-old son Charlie caught fire on the back nine Sunday at the PNC Championship, helping Team Woods set a tournament record with 12 straight birdies before ultimately falling two shots shy of the winning score.

We were treated to another gem of a PGA Tour production highlighting father and son’s shared mannerisms. And we leave 2021 with a well of hope that one of the all-time great competitors still has a chance to end things on his terms.